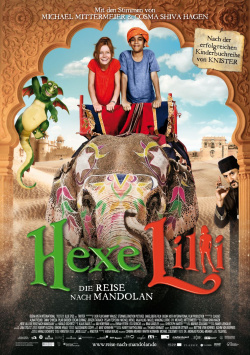 With well over 1 million viewers, the first film adaptation of the popular book series about the "Witch Lilli" by successful author Knister proved to be a real box office hit. So it's no wonder that a sequel wasn't long in coming. And so Lilli and her faithful companion, the dragon Hektor, are now off on their second adventure, which takes them to the faraway kingdom of Mandolan.

So Lilli (Alina Freund) has not really recovered from her first adventure. But when she receives a call for help from the Grand Vizier Guliman (Jürgen Tarrach) from Mandolan, who asks Lilli to free his royal throne from a curse so that he can finally ascend it and take over the rule of Mandolan, the young witch sets off with Hektor (voiced by Michael Mittermeier) to the distant kingdom. Once there, however, Lilli and her chubby little companion soon begin to doubt that Guliman is indeed the rightful heir to the throne of the missing King Nandi (Michael Mendl). All attempts by the power-hungry Grand Vizier and his magician Abrasch (Ercan Durmaz) to keep Lilli from poking her nose into things that are none of her business fail. And so the witch quickly goes from guest to hunted. But that's just the beginning of the great adventure in Mandolan.

It's difficult, as a grown man, to write about a film so clearly aimed at a target audience consisting of little girls as "Witch Lilli - The Journey to Mandolan". Because without the right age and/or gender, the kids movie seems arguably flat, the gags raunchy or just flat, and the story populated by clichés older than cinema itself. The whole thing simply lacks charm and magic, which makes many other good children's films a cinematic delight for the whole family.

But Little Witch Lilli has a large and, above all, enthusiastic following. And for the little viewer(s) who were thrilled by the numerous books and the first film, "Witch Lilli - The Journey to Mandolan" should be great fun again. While adults can actually only shake their heads at the naive staging and the antics of dragon Hektor and his various bodily vapours will meet with little understanding, children can probably lose themselves very well in the colourful fairytale world and laugh especially at the simple-minded fart gags.

"Witch Lilli - The Journey to Mandolan" is not a work for the ages, not a film with cult potential and in terms of craftsmanship a rather average work. But the audience, for whom the film is made, will be well served and will leave the cinema with a smile on their face - and maybe even animated to read the many "Hexe Lilli" books. And that then makes the whole thing thoroughly recommendable, despite all its weaknesses!