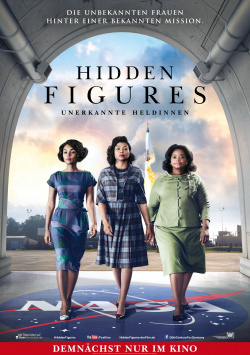 America, early 1960s: The race for the moon between the Soviet Union and the United States has reached its climax. Desperately, NASA personnel are working on the first manned mission to the moon. Among them is a team of African-American female mathematicians that includes Katherine G. Johnson (Tarjai P. Henson), Dorothy Vaughn (Octavia Spencer) and Mary Jackson (Janelle Mon&aacute;e). Separated from the white staff, the women remain largely invisible, even as they make important contributions to the space program. It is only when mission director Al Harrison (Kevin Costner) brings Katherine into the heart of NASA to calculate important flight data that the unrecognized heroines emerge more and more from their shadowy existence. Yet their importance to the moon landing remains unknown for a long time.

Hidden Figures: Unrecognized Heroines is an extremely gripping drama that tells a largely unknown story based on true events. The film, directed by Theodore Melfi (St. Vincent), is based on the book by Margot Lee Shetterly, who traced this story through eyewitness interviews and documents. Katherine G. Johnson, who is meanwhile well over 90 years old, was very taken with the interest in her life story and also met with Tarjai P. Henson who wanted to portray this great woman worthily on the screen. She succeeded in doing so as well as her two colleagues who also deliver great performances. But also Kevin Costner, Jim Parsons (The Big Bang Theory) and Kirsten Dunst deliver more than convincing performances and make the film already purely acting a great pleasure.

But Melfi's staging also helps keep viewers riveted by the story to the end. He strikes just the right balance of drama and humor. The difficulties and prejudices that these women had to fight day in and day out come across very well. At the same time, the director also allows his viewers to really enjoy themselves and be perfectly entertained. Admittedly, there are some tough moments in the moments that deal with the women's personal lives outside of NASA. However, these are necessary to show a complete picture of society at the time and what an accomplishment it was for an African American woman in particular to be taken seriously as a mathematician, work hard for long hours, and then still be there for her family as a mother.

Hidden Figures: Unknown Heroines does take some dramatic liberties, but can still be seen as an important history lesson in tolerance and equality. A superbly acted and extremely compellingly directed film that has already won numerous awards, and not without reason. Absolutely worth seeing!