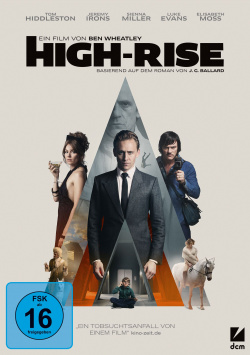 Film: 1975: Dr. Robert Laing (Tom Hiddleston) moves into a nice apartment in a luxurious skyscraper west of London. He wants to start a new life after his divorce in the building, which seems like a microcosm with its own shops, fitness area and even banks. And that's pretty good to start with. There are excessive parties, unrestrained sex and a never-ending intoxication of drugs and alcohol. But the beautiful façade soon gets deep cracks and the gap between the rich inhabitants in the upper floors and the simpler people in the lower floors gets wider and wider - until finally a complete collapse of morality and civilization threatens…

"High Rise" is based on the novel "Hochhaus - High Rise" by the bestselling author J.G. Ballard, who died in 2009. This was previously regarded as unfilmable. Nevertheless, director Ben Wheatley ("Sightseers") dared to make an adaptation. With this he largely confirms the assumption that Ballard's gloomy rejection of civilised society cannot be so easily transferred to another medium. Wheatley did a lot of things right. The dystopian atmosphere he creates is absolutely thrilling and the equipment is simply great. He has created his very own look, which on the one hand captures the 70s in a very authentic way, but on the other hand also looks somehow futuristic. There are shots that are a real feast for the eyes and clearly belong on the big screen.

The actors are also first-class, even if the characters they embody are actually all unsympathetic, selfish and, at first glance, rather superficial. But it is Tom Hiddleston, Jeremy Irons and Luke Evans who succeed in giving these characters the depth that corresponds to the original book. Finally, there is the music, which perfectly corresponds to the oppressive atmosphere of the story. That's all right and makes "High Rise" a very well done movie at its core. The problem is that at some point the collapse of society no longer really interests the viewer. Because after the first riots have occurred, nothing really new happens. The event seems to rotate in a circle, whereby it only takes on ever more extreme forms. Wheatley's popular mixture of drama and pitch-black humor may make for some very good scenes, but at some point the parties, orgies and violent excesses are just tedious.

No question, at "High Rise" the spirits will divorce. There won't be anyone this movie will leave completely cold. There's no such thing as nice here, either you think it's great, or you think it's totally off the mark. But one thing cannot be denied: In its very own way, this work is absolutely fascinating and, despite overdrawing, unfortunately highly topical. And in spite of some restrictions there is one clear thing in the end: worth seeing!

>Picture + sound: The extraordinary visual atmosphere of the film is also adequately accentuated in home cinema thanks to a harmonious colour scheme and good overall sharpness. In the dark scenes there are little weaknesses here and there in the detailed portrayal, but overall the positive overall impression prevails. The sound is determined in many moments by the soundtrack and the dialogues. In the second half, however, there are also some sound effects that provide pleasant movement in the surround range. Good.

Extras: As a bonus there is a much too short Making of Mini documentary (approx. 3:38 min.), as well as 7 interviews with the actors and the director (approx. 55:59 min.).

Fazit: "High Rise" convinces with a depressing atmosphere and a very topical story. The adaptation of the cult novel by J.G. Ballard is slanting, a little bulky and sometimes a little overdrawn. Nevertheless, the movie is fascinating in its own way, even though it won't be accessible to all viewers. The DVD presents it in good picture and sound quality. The extras are quite extensive with about one hour, but also a bit superficial. Nevertheless, the bottom line is clear: Recommended!