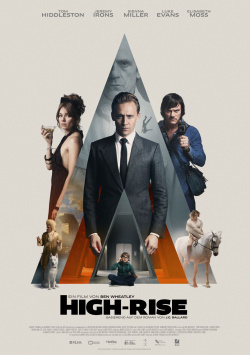 1975: Dr. Robert Laing (Tom Hiddleston) moves into a posh apartment in a luxurious high-rise west of London. In the building, which seems to be like its own microcosm with its own shops, fitness area and even banks, he wants to start a new life after his divorce. And it's settling in quite nicely, too. There are debauched parties, unrestrained sex and a seemingly never-ending rush of drugs and alcohol. But the beautiful facade very soon gets deep cracks and the gap between the rich residents in the upper floors and the simpler people in the lower floors is getting wider and wider - until it finally threatens a complete breakdown of morals and civilization.

High-Rise is based on the novel High Rise by bestselling author J.G. Ballard, who died in 2009. This was previously considered unfilmable. Nevertheless, director Ben Wheatley (Sightseers) has dared to make an adaptation. With this he largely confirms the assumption that Ballard's gloomy rejection of civilized society cannot be so easily transferred to another medium. In doing so, Wheatley gets a lot of things right. The dystopian atmosphere he builds is absolutely gripping and the set is simply gorgeous. He's created a look all his own that on the one hand very authentically captures the 70s, but on the other hand also somehow feels futuristic. There are shots that are a real feast for the eye and clearly belong on the big screen too.

Also the actors are first class, even if the characters they embody are actually all unsympathetic, egotistical and at first glance quite superficial. But Tom Hiddleston, Jeremy Irons and Luke Evans succeed in giving these characters the depth that corresponds to the book. Finally, there is the music, which perfectly matches the oppressive atmosphere of the story. All of this is true and makes High-Rise a very successful film at its core. The problem is rather that the breakdown of society doesn't really interest the viewer anymore at some point. Because after the first riots happen, not much new really happens. The events seem to go around in circles, only taking on more and more extreme forms. Wheatley's fondly used mix of drama and pitch-black humor makes for some very good scenes, but at some point the parties, orgies and excesses of violence just get tiresome.

The absurd thing about it is that this actually reflects exactly the message of the story. If you are shocked and disgusted by the protagonists' behaviour at first, you eventually become numb during the fight between the social classes and lose all sympathy towards the characters - and that is exactly what leads to their behaviour in the end. So what gets in the way of the overall positive impression can actually also be seen as a brilliant move by the director.

No question, High-Rise will divide opinion. There will probably be no one who is left completely cold by this film. There is no such thing as nice, either you think it's great or you think it's totally wrong. But one thing can not be denied: In its very own way, this work is absolutely fascinating and, despite exaggerations, unfortunately highly topical. And for that there is then despite some restrictions at the end but a clear: Worth seeing!

Cinema trailer for the movie "High-Rise (Großbritannien 2016)"
Loading the player ...