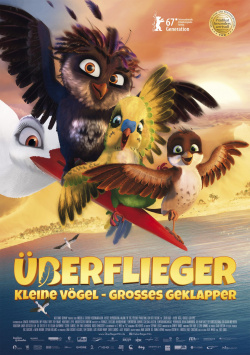 Little Sparrow Richard is convinced he is a stork. After all, the orphan was raised by storks, so he just has to be one too. But when his foster family prepares to fly off to warm Africa for the cold winter months, they must strip Richard of his illusions. A little sparrow would never make the exhausting and dangerous journey. Richard does not want to accept this - after all, he is not a sparrow. And so he sets out all alone to follow his stork family. He gets help from Olga, the dwarf owl who is a little too big, her imaginary friend Oleg and Kiki, the karaoke-wave parakeet. A truly unusual troupe, they have all sorts of dangerous and turbulent adventures on their way to Africa.

The animal adventure Überflieger - Kleine Vögel, großes Geklapper is a nice animated film for children, but adults can also thoroughly enjoy it. Sure, often the film clearly follows the pattern that is used in almost all current animated films. Moreover, in some scenes you can easily recognize parallels to other animated films, which director Toby Genkel and his team have used all too obviously. Nevertheless, the whole thing works really well, with small deductions.

Because the creators have managed to include, in addition to all the conventional elements, some really original ideas, about which not only children can laugh heartily. In addition, the characters are sometimes in a very affectionate way quirky and non-conformist and thus provide a little breath of fresh air in the animated film monotony. The animations are beautiful, but also rather simple in parts. This comparatively small production can't keep up with the quality of Pixar or Dreamworks Animation. But in return, the film can score with a lot of charm, which is clearly more important in the end.

The story is exciting and amusingly realized for children. The message is good, even if it is not exactly subtly conveyed. While Overachievers - Little Birds, Big Clatter may not be a masterpiece, the whole thing is a genuinely endearing underdog story with some really good ideas and charmingly quirky characters. For this there is a very clear: Absolutely worth seeing!