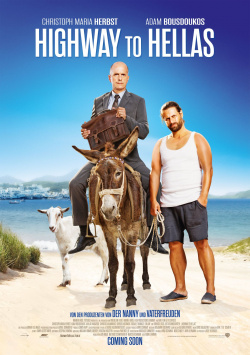 What a thankless job! Bank employee Jörg Geissner (Christoph Maria Herbst) is sent to the small Greek island of Paladiki to find out whether the conditions for a loan approved a year ago are actually being met. Because the inhabitants of the island want to create the Galapagos of Greece here and thus let eco-tourism flourish - and of course they need money for that. In return, they have promised that there will be a beautiful beach, an electric plant and a hospital. And that's what office boy Geissner is now supposed to check out. But on the island he is not exactly welcomed with open arms. Especially the German-Greek supermarket owner Panos (Adam Bousdoukos) is a thorn in the side of the inspector. Together with his friends he tries everything to sabotage Jörg's mission. In the process, something completely unexpected happens: a kind of friendship actually develops between the two men and Jörg begins to see the island and its inhabitants as more than just an annoying file number. But his boss doesn't like this at all.

In times when the media in particular are always making a big deal about each other, Highway to Hellas tries to counter the strained German-Greek relationship caused by the financial crisis with humour. In the style of the cult film Local Hero, director Aron Lehmann provides a culture clash of the most amusing kind. Clichés are not exactly used sparingly, but they are primarily used to playfully deal with them and thus expose them for what they are: Clichés, that is. It's true that this doesn't always succeed, and sometimes the humor seems a bit too over-the-top. But all in all, Lehmann has succeeded in making a truly charming film that leaves the audience with a smile on their faces.

Christoph Maria Herbst gives a very likeable performance as the stiff lawyer. The transformation his character undergoes over the course of the film may be arguably predictable, but it is pulled off very believably by Herbst. This is also due to the fact that the other characters are so endearingly drawn that even as a viewer you quickly lose your heart to Paladiki and his weird birds. Adam Bousdoukos in particular is simply wonderful as a shopkeeper with a big heart for attractive female tourists. The two mismatched men are a very coherent duo and as a viewer you soon wish that despite all their conflicts they will become good friends in the end. Not a particularly far-fetched thought in a comedy like this . but still somehow just lovely.

As is so often the case, the production of Highway to Hellas runs out of steam a bit by the end. Charming and at times delightfully clever wit then gives way to over-the-top slapstick that just feels out of place and unnecessary. The whole thing culminates in a very nice finale. But you surely could have gotten there in a less overdone and flat way. But fortunately this is only a small blemish in an otherwise very positive overall picture, which offers its viewer nice entertainment and a lot of good humor in front of a beautiful holiday scenery. And for that, the bottom line is a very clear: Worth seeing!

Cinema trailer for the movie "Highway to Hellas (Deutschland 2015)"
Loading the player ...