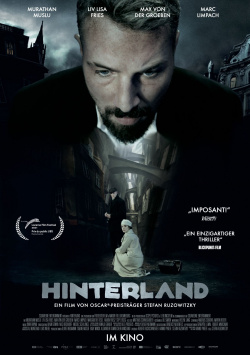 Vienna, 1920: After two years as a prisoner of war in Russia, former criminal inspector Peter Perg (Murathan Muslu) returns to his hometown. But nothing here is the same as it used to be. His wife has left with his daughter, he has lost his job, and what was once an empire has become a republic in which he no longer seems to have a place. When, shortly after his return, a serial killer keeps the city in suspense, Perg himself initially falls under suspicion. Especially the young inspector Paul Severin (Max von der Groeben) is convinced of his guilt. But with the help of forensic pathologist Theresa Körner (Liv Lisa Fries), Perg manages to get on the trail of the real killer. But he has not yet completed his work and will not let anyone stop him in his bloody goings-on....

"Hinterland" is the new film from Oscar winner Stefan Ruzowitzky("The Counterfeiters", "Narciss and Goldmund"). Although the thriller offers rather conventional fare dramaturgically, the film as a whole is something very special. For "Hinterland" was shot almost entirely in front of blue screens, and the set design, reminiscent of the expressionist motifs of 1920s cinema, was then created on the computer. This may be stylistically reminiscent of films like "Sin City", but it still has a character all its own. For the director builds up a very special atmosphere through the images, but also through the acting of his ensemble, which quickly grabs you and doesn't let go until the (admittedly somewhat predictable) end.

The turmoil of Peter Perg becomes very clear against the backdrop of Vienna, which has changed after the war. He often seems like a foreign body, an outcast, despite his merits before and during the war. That Murathan Muslu embodied this role so intensely and believably, despite only having to do so in front of a blue screen, is a truly impressive achievement. But the rest of the ensemble is also convincing, especially Liv Lisa Fries, who embodies a very interesting and strong woman, similar to her performance in "Babylon Berlin".

"Hinterland" is a special film in every respect - in the best sense of the word. Stefan Ruzowitzky has succeeded in staging what is essentially a conventional serial killer story with social-critical relevance, visual fascination and acting excellence. This has more than earned a "Absolutely Worth Seeing"!