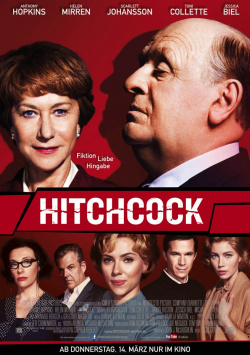 Alfred Hitchcock (1899-1980), the master of suspicion, was undeniably a genius as a filmmaker. As a person, on the other hand, he was more of a controversial figure who is said to have been downright tyrannical and obsessive at times, especially in his dealings with his primarily blonde actresses. Sacha Gervasi (Anvil: The Story of Anvil) addresses these two aspects, the genius of the filmmaker and the obsessions of Hitchcock the man, in his feature debut Hitchcock in a sometimes very amusing, interesting, but unfortunately also somewhat indecisive way.

Based on Stephen Rebello's book Alfred Hitchcock and the Making of Psycho, the story centers on Hitchcock's (Anthony Hopkins) efforts to film the controversial thriller Psycho. It was serial killer Ed Gien who so intrigued Hitchcock and who eventually led him to Robert Bloch's novel inspired by Gien's exploits. It was material that offered him the opportunity to deliver something completely surprising and shocking. Naturally, this was not well received by his backers or the censors, and Hitchcock had to fight to get the film made before even a second had been shot. The filmmaker was convinced of the project and although he was aware that Psycho could ruin him financially, he wanted to shoot the thriller at all costs. He received support only from his wife Alma Reville (Helen Mirren), who always stood by him despite his moods and enormous stubbornness. But Hitchcock didn't seem to realize that even Alma's patience would eventually come to an end. When the attractive Janet Leigh (Scarlett Johansson) is cast in the film and Hitchcock pays increasing attention to her, Alma begins to really doubt her marriage for the first time. Working with screenwriter friend Whitfield Cook (Danny Huston) these days gives her exactly the kind of feelings that Alfred hasn't given her in a long time. But the fact that Alma is spending a lot of time with another man, and thus no longer giving her full attention to her Alfred, makes the filmmaker furiously jealous. And so soon not only is the filming of Psycho at stake, but so is their marriage.

Hitchcock has some quite wonderful moments to offer. The scene in particular where Hitchcock listens outside the door of the movie theater at the first screening of Psycho to see if the legendary shower scene works the way he envisioned is just great. The many dialogue duels that Hopkins and Mirren engage in are also extremely entertaining, especially in the first half of the film. Add to that the accomplished cast, and this makes for a piece of acting cinema worth watching. However, as well as some elements work, the same can't be said for others. Thus, the production as a whole seems a bit inconclusive. The film doesn't quite seem to know whether it wants to take a tongue-in-cheek look at the making of a masterpiece, whether it wants to be a marriage drama or rather the portrait of a controversial man with all his merits, but also with his many abysses. All of these aspects are explored in the film, but without the depth that would have been necessary to create a truly coherent picture.

So the parts that the audience gets to see of the making of Psycho are quite wonderful. Whether it`s the perfect casting of James D`Arcy as Anthony Perkins or the sets that later made film history, all of it is quite wonderful. But it just falls short. The legendary house of Norman Bates is only seen once briefly in the background and most of the characters, apart from Scarlett Johansson as Janet Leigh, remain too much in the background to leave a lasting impression. Much the same can be said for the glimpse into Hitchcock's inner self. His imaginary conversations with Ed Gein make his almost morbid fascination for the serial killer quite tangible. And his obsession with blonde women is also touched on quite comprehensibly in an intense scene. But again, it ultimately remains too superficial to do justice to the complexity of Hitchcock's character.

And even the factor that actually works best - the chemistry between Alfred and Alma - is only exploited to a degree. This is a real shame, because the interplay between Anthony Hopkins, who unfortunately never completely disappears behind his make-up and only really becomes Hitchcock in a few moments, and Helen Mirren is really quite wonderful. But all these good parts are of no use if they don't mesh coherently. And that's the shortcoming that prevents Hitchcock from becoming the film it could have been.

For lovers of Alfred Hitchcock's films, the whole thing is absolutely worth watching if only for the many lovingly interspersed allusions. But those who expect a rousing biopic or hope to really learn more about the making of Psycho will probably leave the cinema disappointed in the end. Therefore: Despite some great moments and entertaining elements only worth seeing with some reservations!

Cinema trailer for the movie "Hitchcock (USA 2012)"
Loading the player ...