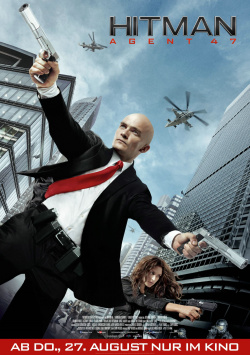 47 (Rupert Friend) is the result of a genetic experiment. It is the perfect killer machine - effective, precise and absolutely emotionless. The program from which he originated has long since been discontinued and 47 is the last of its kind. But a large corporation wants to revive the program in order to breed an invincible killer army. That's supposed to stop 47. The key to this is a scientist who is the only one who knows the codes for the development of clones. But he's been in hiding for years. The only way to get close to him seems to be his daughter Katia (Hannah Ware), whose heels the mysterious John Smith (Zachary Quinto) has also been following. A wild and extremely bloody cat-and-mouse game begins, which leads all participants from Berlin to Singapore, where even the actually invincible 47 is confronted with an extremely dangerous and powerful enemy...

"Hitman: Agent 47" is, after "Hitman - Jeder stirbt allein" from 2007, the second attempt to establish the successful video franchise in the cinema. But unfortunately this attempt fails again because of a production filled with involuntary comedy, wooden actors and annoying Audi-Product Placement, which also seems a bit sloppy due to a frightening number of connection errors. No question about it, first-time director Aleksander Bach has an eye for style. His movie looks really good in many moments. But behind the pretty facade there is unfortunately a script filled with stupid dialogues, which even talented actors like Ciarán Hinds or Jürgen Prochnow can't breathe life into. With less experienced colleagues like the completely overtaxed Hannah Ware or a frighteningly soulless Thomas Kretschmann, the weak script really has catastrophic consequences.

Rupert Friend is anxious as a cloned killer, but he is not really convincing with the frozen facial expression with which he shoots his way through the area. The only thing that remains is the action, which at least could comfort genre fans about some weaknesses. Unfortunately, the movie can't make up much ground here either. The fact that 47 is always following his opponents in slow motion is at some point simply taking on silly traits. The fight scenes are sometimes quite amusing, but the overly clear use of CGI-blood and other special effects also robs these moments of their potential.

"Hitman: Agent 47" is by far not the worst movie of the year. For that he simply has too many successful aspects to offer. But given the potential offered by the popular model and the obvious talent of some of those involved in front and behind the camera, the result is not only disappointing, but also a little annoying. It may be that some viewers, who simply like it when there is a nice crash, don't mind the weaknesses listed here and still have a really good time in the cinema. But even if the movie has entertainment value on a Uwe Bollschen trash level, even with the greatest goodwill it can't be said that this video game adaptation has become a good movie. Unfortunately, there is only one way to do this: with clear limitations, conditionally worth seeing - or to put it another way. Game over!