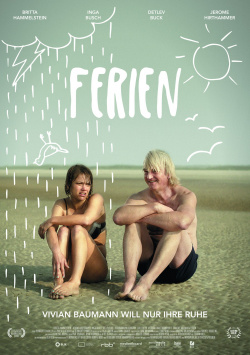 It could all be so simple. After all, Vivian Baumann's (Britta Hammelstein) life is actually running on straight, even lines. She's about to become a prosecutor and move in with her boyfriend. But suddenly she has the feeling of being completely exhausted. She just can't take it anymore and just wants to be left alone. But luckily there is her father (Detlev Buck), who takes Vivian to a North Sea island without further ado and has a lot of good advice in his luggage. But the well-intentioned action of her father is also too much for the young woman and it looks as if the island vacation will intensify her problems instead of solving them. But then Vivi gets to know the island and its peculiar inhabitants better, makes friends and even starts working in the small shop of the quirky Otto (Ferdinand von Schirach). And the longer she stays on the North Sea island with its South Sea climate, the more the constraints of her previous life fall away from her. But can this be permanent?

With Ferien Bernadette Knoller presents the final film of her directing studies at the Babelsberg Film University. The feature film debut of Detlev Buck's daughter bears her very own signature, but also allows her father's dry and sometimes somewhat wry sense of humour to shine through a little. The film has a clear theme, but not a very clear narrative structure. Rather, Vivian's time on the island is more of a string of quirky episodes and wonderful snapshots. At the same time, it's definitely worth watching what's going on in the background and picking up small snippets of conversation. Here the film has some delightful ideas to offer that are just pleasantly out of place and enormously quirky (A dead pigeon fell on my plate).

The cast, especially Britta Hammelstein, the very atmospheric camerawork and a relaxed, idiosyncratic approach to some very essential themes makes Vacation a successful tragicomedy that offers viewers 88 minutes of entertaining vacation from everyday life. For this there is a very clear: Worth seeing!