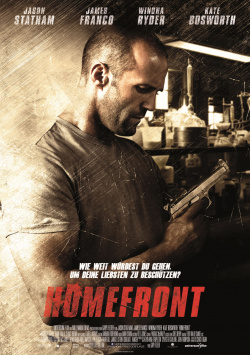 After putting a powerful drug lord in jail as an undercover agent, Phil Broker (Jason Statham) lives in the knowledge that the gangster's revenge will one day haunt him. Still, in order to guarantee his daughter Maddy (Izabela Vidovic) as safe a life as possible, he moves with her to a sleepy little town in the middle of the swampy Louisiana backcountry after his wife's death. Too bad Maddy clashes at school with the nephew of local drug lord Gator Bodie (James Franco), of all people. And the latter's drug-addicted sister Cassie (Kate Bosworth) insists that Gator defend the family honor and show the newcomer who's in charge. Although Broker does everything he can to mend fences, the situation soon threatens to escalate and the swamps could turn into a bloody battlefield.

The thriller Homefront was penned by Sylvester Stallone, who actually conceived the story for another Rambo movie. When that fell through, he unceremoniously penned it for his Expendables co-star Jason Statham. Directed by Gary Fleder (The Verdict, Don't Say a Word), the British action star slogs through a not particularly original, but thoroughly entertaining thriller. From Statham should not be expected really great acting. He plays mimically as reduced as ever - as his fans know and love him. Even if it would be nice to see a different side of Statham, he is again in his own way just cool.

By this coolness and by the fact that it is clearly noticeable James Franco's game, how much fun he had to give once the villain, some of the dramaturgical hangs can be forgiven. Whenever Statham gets to show himself in action and Franco lets the ruthless drug lord hang out, Homefront is a lot of fun. The action sequences at the beginning and towards the end of the film are also extremely entertaining and worth watching. In between, however, the action has to fight its way through a jumble of clichés and long-winded dialogue sequences - a struggle that unfortunately comes at the expense of entertainment value.

Because the film as a whole lacks originality and the tension and action curve only occasionally skyrockets, the rather woodenly delivered dialogue and the very template-like drawn characters are much more noticeable than is the case with many a consistently fast-paced action cracker. Sure, Homefront has some very entertaining moments and some of the cast, including Winona Ryder, do their thing really well. But the story simply lacks that certain kick and an element of surprise that could maintain the tension throughout, despite all the predictability. Nevertheless: If you like Jason Statham and appreciate American thrillers with a little 80s flair, you will be entertained for long stretches. And for this there is then also a proper: with small deductions worth seeing!

Cinema trailer for the movie "Homefront (USA 2013)"
Loading the player ...