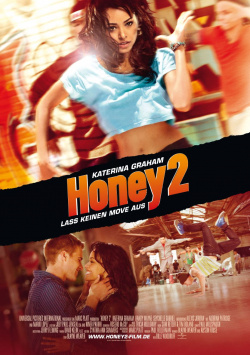 After the huge success of dance movies like the Step Up flicks or even Streetdance 3D, the 2003 hit movie Honey now finds its superfluous sequel. And to put it straight: the titular Honey, embodied by Jessica Alba in the first film, doesn't appear in the sequel for a second. Only her name is mentioned here and there. Honey 2 centers on rebellious Maria Bennett (Katerina Graham), who, after spending some time in juvie, is given a new chance. She is taken in by Connie Daniels (Lonette McKee) and told to work off her community service hours at her daughter Honey's dance center. There Maria meets the dance group of the charismatic Brandon (Randy Wayne), who immediately recognizes Maria's dancing talent and offers her to participate together with his crew in the Battle Zone, a big dance battle.

But Maria's ex Luis (Christopher Martinez), leader of the 718 Crew, of all people, would face her there as competition. And since Luis knows exactly what a great dancer Maria is, he leaves no stone unturned to get her back on his side with his charm. And soon it comes as it must: there are jealousies, quarrels, the dance crew threatens to break up and the dream of victory to burst.

Honey 2 is nothing more than a mix of Step Up 3D, Streetdance and the first Honey. Nothing about the flick feels original or particularly compelling. The actors act woodenly, the dialogue is incredibly flat and the plot bristles with clichés. Even the dance battle scenes are only partially convincing, even though the dancers do a great job. In principle, this isn't a bad thing, because the movie serves its intended target audience quite well. The soundtrack is well tailored to the taste of young moviegoers, the actors are nice to look at and the plot is simple enough not to distract from the dance sequences.

What might bother the target audience, though, is the fact that the makers tried a bit too cramped to give the film dramatic depth. Thus, the whole thing is stretched to a completely unnecessary length of almost two hours, which repeatedly makes for unnecessary boredom - especially since all the set pieces of the story have been seen several times in other dance films in the last twelve months alone.

Honey 2 is not a good film, even if it serves its target audience quite neatly. But since almost every aspect of the film seems to have been lovelessly cobbled together from other representatives of the genre, the end result can only be recommended to a very limited extent. No question: if you like the Step Up movies, you'll be able to stomach Honey 2. But if seeing attractive bodies twitching in appealing choreography isn't enough for you, and if you're also hoping for a nice story or something akin to acting talent, you definitely won't leave the cinema dancing for joy!