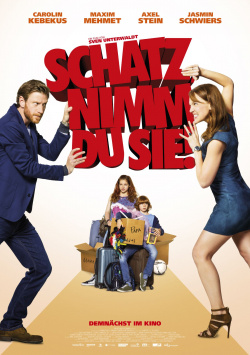 Honey, you take her!

Actually, everything is supposed to go quite harmoniously when Toni (Carolin Kebekus) and Marc (Maxim Mehmet) decide after 15 years of marriage that they want to divorce. They want to part as friends, which would also be best for their two children Emma (Arina Prokofyeva) and Tobias (Arsseni Bultmann). But when both get the chance for a great job abroad, the mood threatens to tip. When Toni catches her future ex-husband making out with a colleague, it's clear to her that she won't turn down the job offer. But Marc doesn't want to give in either and so a custody battle of a different kind breaks out between the two. Because now they try that the children do not want to live with them. And for it they seize to so some drastic means.

Darling, you take it! is a shockingly unimaginative (almost) 1:1 remake of the deliciously biting French hit comedy Mama vs. Papa, which ran in our cinemas in 2015. The three kids in the original were made into two in the German version, some of the particularly nasty scenes were removed, and the finale was completely watered down once it had to be taken up a notch. Otherwise, however, many scenes and dialogues are actually almost completely taken over, which makes the German remake lack both originality and wit. In itself, there is nothing wrong with a remake of a successful material, as long as you give it your own touch. Unfortunately, director Sven Unterwaldt (7 Dwarfs) doesn't manage to do that at all. His film is merely a watered down copy of the original. And that might not make it a really bad film, but a completely superfluous one.

You could now argue that the whole thing is just meant to serve as a cinema vehicle for the currently very popular Carolin Kebekus anyway. The only problem is that she may have her strengths as a comedian, but as an actress her acting sometimes lacks the subtlety that would be necessary to make her character believable and sympathetic. All of the characters in the film have this problem, though. Neither the children, nor the adults - unlike in the original - are real sympathetic characters. Again, there is a good example in the form of Marc's colleague, who immediately throws herself at him in a really stupid way. There is no doubt at all that the viewer is not allowed to like her. In the original, on the other hand, she at least seems very sympathetic at the beginning and you understand the dad why he's attracted to her.

Darling, You Take Her! is once again a good example of why remakes get such a bad rap. If the film had just stolen the idea from the original and created something all its own from it, the comedy might have actually been funny and worth watching. But since some of the baddest moments of the original have been removed and only the ending has been changed - and not for the better - there is only one recommendation left: Better watch the really funny original and give this remake a wide berth. Unfortunately only very conditionally worth seeing!

Cinema trailer for the movie "Honey, you take her! (Deutschland/Frankreich 2016)"
Loading the player ...