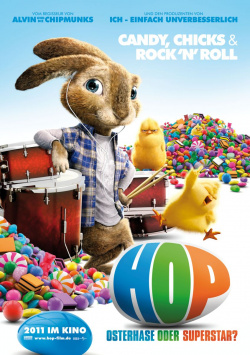 After Santa Claus seems to have a holiday monopoly in the cinema for many years now, the Easter Bunny is now trying to dispute his supremacy with "Hop - Easter Bunny or Superstar". But despite the high cuteness factor, Tim Hill's family film ("Alvin and the Chipmunks") unfortunately gets a lot of hope and doesn't offer more than garish humour of the flatter kind.

Actually E.B. (in the German version spoken by Alexander Fehling) is supposed to take over the job as Easter bunny from his father (spoken by Wolfgang Stumph) this year. But E.B. would much rather make music and lead a life without the great responsibility that lies on the Easter bunny. So he decides to secretly leave the Easter Islands and try his luck in New York. There he meets Fred (James Marsden), who is trying to get his life together. The chance acquaintance with the talking and playing rabbit confuses Fred's life again. But soon everything points to the fact that E.B. could actually make a career and Fred as his mentor could profit from it. But then the rabbit doesn't suspect that Carlos (spoken by Detlev Buck), a chick that has grown too big, is planning a riot at home and that the aging Easter bunny urgently needs help...

Tim Hill makes it relatively easy and varies the story of his cinema success "Alvin and the Chipmunks" only marginally. In addition, a number of set pieces from various Christmas films are simply transferred to Easter without really incorporating their own ideas. For example, Santa's helpful elves are simply exchanged for chicks, who are allowed to replace the reindeer and pull the "sleigh" of the Easter bunny at the same time. Sure, "Hop - Easter Bunny or Superstar" has some funny and cute moments to offer. But the strip, which looks like an advertising video of the confectionery industry in the first few minutes, lacks not only originality, but especially charm.

Was E.B. (abbreviation for Easter Bunny) really cute animated and he is guaranteed to win the hearts of many children very quickly. But unfortunately he can't really do more than the also very musical chipmunks in front of him. The jokes are harmless, but also very shallow, whereby the viewer should always be reminded by the not exactly unobtrusive soundtrack which scene is meant to be funny and where rather big emotions are in demand. If you can't get enough of movies like "Alvin and the Chipmunks" or "Garfield", you will certainly get your money's worth at "Hop - Osterhase oder Superstar". But those who hope for original humour or even anarchic wit will be bitterly disappointed. After all, the adventures of E.B. have something in common with Easter: the film is colorfully painted, tastes sweet like a chocolate rabbit, but is just as hollow inside and you have to look for the gags, like well hidden Easter eggs. If this doesn't bother you, you can hop into the cinema.