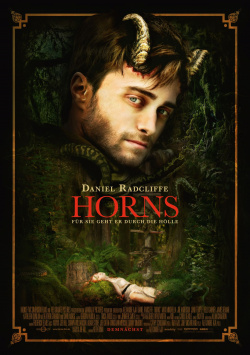 For Ig Perrish (Daniel Radcliffe) a world breaks down: his great love Merrin (Juno Temple) has been brutally murdered. And he of all people wants to blame for it, the two had broken up the day before after a loud argument in a diner. A classic motive for the crime, which makes even his parents doubt his innocence. Only Ig's brother Terry (Joe Anderson) and his childhood friend Lee (Max Minghella) don't believe that he would be capable of such a deed. But the only evidence of his innocence has been destroyed, so things don't look good for Ig. But then something incredible happens: he wakes up one morning to find that he's growing horns that make him look like a spawn of hell. And what's more, these horns seem to make those around him tell him their darkest secrets. For Ig, the obvious curse turns out to be a blessing at the same time. For now he can set out on his own in search of Merrin's killer - and thus perhaps still save his soul...

French filmmaker Alexandre Aja is known for relentlessly gory, atmospheric and occasionally - as in Piranha 3D - somewhat weird horror fare through films like High Tension or The Hills Have Eyes. Compared to his earlier films, Horns, the film adaptation of a novel by Stephen King's son Joe Hill, is comparatively tame. There are a few crude scenes and some cynical humor, but it's not without reason that this fantasy flick is Aja's first directorial effort to receive a 16+ release in Germany. No wonder, because the film takes a lot of time to go into flashbacks about the awakening of love between Ig and Merrin and the friendship between Ig, Lee and Terry that has existed since childhood. In these moments, Joe Hill seems to have been inspired by his father's earlier works, the spirit of Stand by Me or It being clearly recognizable in the dynamics of this clique of kids.

The other part of the film deals with Ig's search for the murderer, which mutates into an exposure of the hypocrisy of a small-town American idyll. Here the film takes on almost satirical proportions at times, which suits it very well. The bitter humor is tremendous fun and it becomes all too clear at many moments that the film could have used a little more of it. Because the premise of the story, when the production takes itself a little too seriously, quickly tends towards unintentional comedy. However, when this is used purposefully, the entertainment value clearly benefits.

With which this unusual horror story can score points is, on the one hand, the atmosphere achieved through the imagery, which is absolutely captivating. On the other hand, the cast can also leave a positive impression. Daniel Radcliffe once again successfully plays against his Harry Potter image and cuts a really good figure both with and without horns. The rest of the cast fades into the background a bit, but especially towards the end Max Minghella and Joe Anderson can deliver more than just good extra performances.

Horns is entertaining, a bit weird and quite original. But precisely because the story is so absurd, you just expect something more - especially from a director like Alexandre Aja. So in the end you are left with a positive impression, but also with a little bit of disappointment. Nevertheless, it is still quite clearly enough for a: Worth seeing!