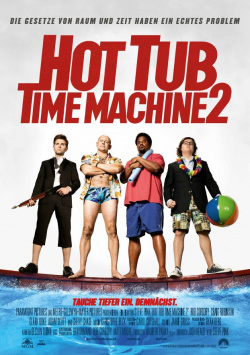 The hot tub is fired up again, because the chaotic troupe from the surprise hit of 2010 is back! After their trip back to the '80s in particular brought Nick (Craig Robinson) and Lou (Rob Corddry) wealth and fame, they must now travel to the future along with Lou's son Jacob (Clark Duke). Because someone shot Lou at a party and the key to the crime seems to be in the year 2025. There they want to find their old buddy Adam again, who is supposed to help them prevent the murder. But instead of Adam, his son Adam Jr. (Adam Scott) attaches himself to their heels and together the quartet goes on a madcap trip that once again makes it clear that you shouldn't mess with time...

Hot Tub Time Machine 2 brings much of the team from Part 1 back in front of and behind the camera. Steve Pink is back directing, and with the exception of John Cusack, the rest of the main cast is back as well. Even Chevy Chase has been persuaded to make a mini guest appearance. The conditions for this sequel to be really fun are actually very good, despite the absence of John Cusack. Granted, Part 1 wasn't necessarily a particularly subtle, deep comedy with tongue-in-cheek humor. Often, the film relied on zingers and deeper sex jokes. But the charming play on '80s nostalgia, a few nice runnig gags, and a likable romance made this time-travel fun well worth seeing, despite a certain extraneous shame factor.

Unfortunately, the second dip in the time-travel whirlpool lacks everything that worked in its predecessor. Every other word seems to be about male genitalia and/or their uses, which is just not funny in the long run, but boring and annoying. Furthermore, the characters have been robbed of any sympathetic value. Especially Lou, who was already a little creep in the first part, is now completely unbearable. Nick and Jacob are also mere shadows of their former selves, making them completely uninteresting as characters. And finally, Adam Scott, who was hired to replace John Cusack, remains so pale that you've actually forgotten about him even as you're watching the film.

With flat gags and unlikable characters, Hot Tub Time Machine 2 is left with few assets that could prevent it from completely sinking. But unfortunately, Steve Pink misses most opportunities to play them too. In his version of the year 2025 you can make out some quite successful and even cryptic ideas. And indeed, these can also generate the one or other good laugh, so that the film is still really fun at some points. But unfortunately, each successful gag is rolled down by the next wave of infantile penis jokes, so that any emerging laughter then but only ends in a tired smile.

For those who like raunchy US comedies in which the story doesn't play a supporting role and in which the laughs are mainly aimed at the lower body regions, a bath in the Hot Tub Time Machine 2 might turn out to be pleasantly entertaining and amusing in the end. But if you were hoping for the charm and originality of the first part, in addition to the really embarrassing sex jokes in their overdose, you'll wish you had your own bathtub time machine to travel back in time with in order to stop Steve Pink from directing this unnecessary and unfunny sequel. And therefore also applies: only with very clear deductions for Zoten lovers still worth seeing!