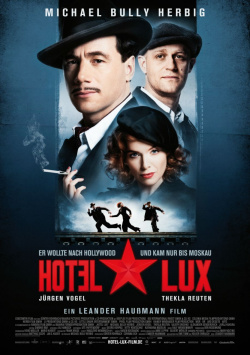 After sending a sprightly gang of pensioners into battle against the banks in Dinosaur, Leander Haußmann takes a trip down memory lane in his latest film. For his tragicomedy Hotel Lux, set in the late 1930s, Haußmann was able to enlist audience favorite Michael Bully Herbig, who shows more than just his comedic side here for the first time. It's a bold career move that his fans will hopefully appreciate.

Herbig plays comedian Hans Zeisig, who, along with his partner Siggi Meyer (Jürgen Vogel), enjoys great success with a parodic act shortly before Hitler's rise to power, in which he impersonates Stalin and Meyer impersonates Hitler. But when Siggi goes underground and Hans is asked to take over the role of the greedy Jew, he makes a fatal decision: he dares to go on stage himself as Hitler and makes a bad joke that could lead to his immediate arrest. But Hans manages to escape and makes it to Moscow with false papers, where he tries to find shelter in the exiled Hotel Lux before heading to Hollywood. Too bad, though, that he is mistaken for Hitler's renegade astrologer by the Soviet secret service and is suddenly tasked with predicting the future for Stalin. And so he soon finds himself in the middle of political intrigues and power games. The fact that he also meets the Dutch underground fighter Frida (Thekla Reuten), with whom he had already fallen in love in Berlin, again in Hotel Lux, doesn't really make the whole thing any easier.

Hotel Lux skilfully manages the balancing act between comedy, satire and drama. The film is bursting with moments that have an almost absurd comedy. Especially here Michael Bully Herbig is in his element and delivers a really convincing performance. But then there are also scenes that are dramatic, sad and moving. The fact that Herbig is able to completely restrain himself in such moments and refrain from any kind of clowning around is probably one of the most pleasant surprises of a film that boasts a cleverly constructed script, a first-class set and a thoroughly convincing ensemble of actors.

The way Haußmann weaves together reality and fiction is amusing enough to provide quite a few good laughs, while at the same time being sensitive enough not to ridicule the horrific events of the time. It is this successful balancing act that allows the viewer to enjoy a high level of entertainment. The effort that went into the sets and décor further supports this. Since it was no longer possible to shoot in the real, dilapidated Hotel Lux, Haus Cumberland on Kurfürstendamm was unceremoniously transformed into the legendary hotel for exiles. Again, it is always clear how much effort and care was put into the project, which is enormously important for the atmosphere and mood of the film.

However, despite all its aforementioned qualities, the film has one very big problem. Viewers who might take a liking to the tragicomedy might be put off by Bully Herbig, as they tend to associate his name with entertaining slapstick, but not deep entertainment. Bully fans, on the other hand, might be disappointed by the fact that this film has a very different kind of humor to offer than they are used to from their idol. However, since the publicity for the film is already quite clearly focused on Michael Bully Herbig, the wrong viewers may be drawn to the film during the all-important first week, which could be detrimental to its long-term success. Hopefully, an intersection will be found that is big enough for word to get out that the film, while not a typical Bully comedy, is still a film worth seeing and a really good one. Therefore, the bottom line is a well-deserved: absolutely recommendable!