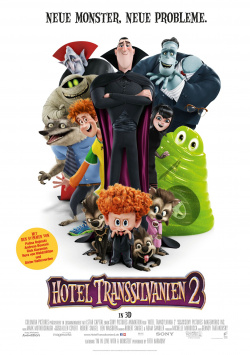 With difficulty, Drakula has gotten used to the fact that his beloved daughter Mavis has married a human and that his son-in-law Johnny now lives in his Hotel Transylvania among all the monstrous guests. His great hope now is that at least his grandson Dennis will become a real vampire. But then comes the shock: Mavis actually plans to move with little Dennis near Johnny's family, so that the boy grows up among humans and not among monsters. Now Drak has only a few days to prove to his daughter that Dennis is a vampire and shouldn't be raised among humans. Together with his monster friends Frank, Murray, Wayne and Griffin, he takes the boy on a journey to their old haunts in order to awaken the vampire in him through the terror they will spread there. But the trip goes very differently than planned and threatens to end in utter chaos.

In 2012, director Genndy Tratakovsky landed a respectable box office success with the first visit to Hotel Transylvania. With a box office take of over $350 million worldwide, the animated flick grossed many times its production costs, making a sequel all but inevitable. The basic idea of the story was actually much better than its overdone execution, which made this monster comedy not really stand out from the crowd of contemporary animated films. Whether Hotel Transylvania 2 is therefore really a film the world has been waiting for may be doubted. But there is a positive surprise to report: even if part 2, which with minor exceptions again gathers the same team of creators and voice actors, is still no masterpiece and in too many moments relies on worn-out elements (roller coaster effects, the obligatory dance number at the end, etc.), it offers overall much better entertainment and more successful gags than its predecessor.

Right at the beginning, the colorful hustle and bustle with an extremely high gag density for heavy continuous laughter. Even if some of these gags turn out a bit flat and all too predictable, such small weaknesses are made up for by many playful and original ideas. The humor is a bit macabre here and there. But even these moments are presented in such an endearing way that they always remain appropriate for the target audience. So even smaller moviegoers won't run the risk of getting really creeped out here. Towards the end, the dark henchmen of Drak's grandfather (wonderfully dubbed by Dieter Hallervorden) show up, which might scare very young viewers a little bit. But even their appearance ends in a big slapstick orgy, so that a little goosebumps also evaporate quite quickly.

No question, Hotel Transylvania 2 is first and foremost unrestrained silly. You'll look in vain for subversive humor here. That may be because Adam Sandler, who voices the vampire Drakula in the original, also co-wrote the script this time around. And Sandler is really not known for deep jokes of the intellectual kind. But with delightfully weird ideas, some nice puns and charmingly drawn characters, this monster tale simply offers carefree fun. The fact that the intellect is not particularly stimulated, can be quite forgiven.

Great praise also goes to the successful dubbing. Even if some central roles were filled with new speakers (Elyas M`Barek was replaced by Andreas Bourani and Josephine Preuss by Palina Rojinski), all speakers do their job really well. And the script largely succeeds in transporting the wordplay of the English original into the German version as well. All of this means that viewers who liked Part 1 are guaranteed to love Hotel Transylvania 2. And those who generally like weird, over-the-top animated comedies will also get their money's worth here. While it's far from the best animated film of the year, it's definitely perfect fodder for an enjoyable afternoon at the movies. Worth seeing