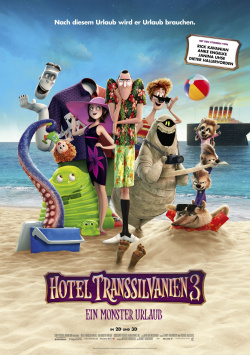 With difficulty, Drakula has gotten used to the fact that his beloved daughter Mavis married the dorky human Johnny and that his grandson Dennis is not a pure vampire. But everyday life has long since returned to Dracula's Hotel Transylvania. Mavis notices more and more that her father is stressed. Is it because of all the work? Or is he just lonely? Regardless, something has to be done about it. Without further ado, the vampire girl organizes a cruise for her father and all his monster friends to Atlantis. Although Drakula isn't exactly pleased by this surprise at first, that changes abruptly when he falls head over heels in love with Captain Ericka - even though she's also human. Completely befuddled by his feelings, the vampire lord doesn't realize that he and his friends on the ship are sailing straight into a deadly trap.

Director Genndy Tratakovsky landed a respectable box office hit in 2012 with the first visit to Hotel Transylvania. With box office takings of over $350 million worldwide, the animated flick managed to generate many times its production costs, making a sequel virtually inevitable. Part 2 was able to bring in an additional 100 million dollars, which is why there is a third reunion with vampires, mummies, slime monsters, werewolves and invisible people three years later. To be blunt, if you enjoyed the first two installments, you'll be in for another delicious treat.

However, it is noticeable that the not very subtle humor of the story has worn off a bit in the course of the films. The arguably overdone execution, which is especially evident in the completely overdrawn movements of the characters, can in many moments no longer provide hearty laughs, but at most a weary smirk. The partly really ugly animations - even if exactly this look is intended - also contribute little to the fact that in the end a consistently positive overall impression remains.

To admit, there are then here and there nevertheless a few very amusing and even original ideas. But the bottom line is that Hotel Transylvania 3 is just a slight variation on familiar gags that just don't work quite as well on the third try. It's also a shame that not all the voice actors from the previous films were hired for the German dubbing. Even main characters like Mavis and Johnny have been dubbed by different voice actors in every film so far. The Cruise of the Monsters offers quite nice entertainment, but in the end the feeling remains that maybe now is the right time to close Hotel Transylvania for good - because for a fourth rehash the gags are just way too lame. Worth seeing with some reservations!