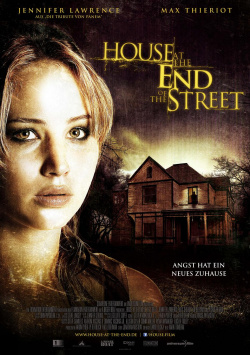 House at the End of the Street

It's supposed to be a completely fresh start. At least that's what newly divorced Sarah (Elisabeth Shue) hopes when she moves into a gorgeous house in a quiet small town with her 17-year-old daughter Elissa (Jennifer Lawrence). Here, she hopes to improve her relationship with her daughter. But it is not so easy, because Elissa has learned in recent years to take responsibility for their own lives. And so it is difficult for the girl to be extremely mothered by Sarah again. The situation becomes even more difficult when Elissa befriends the boy next door, Ryan (Max Thieriot). He still lives in the house where his little sister brutally murdered his parents years ago. Since then, Ryan has been shunned like the plague by the rest of the neighbors. And Sarah doesn't like the fact that her daughter is developing an ever closer relationship with the withdrawn boy. But of course Elissa doesn't want to be dictated to whom she gives her heart - a decision she will bitterly regret.

House at the End of the Street is not necessarily the best example of Jennifer Lawrence's acting talent. The actress, who has already been nominated for two Oscars, has been able to impress in recent years, especially in smaller productions such as Winter's Bone, The Beaver or most recently in Silver Linings. Her big breakthrough, however, came with the first film adaptation of The Tribute to Panem trilogy. And that despite the fact that this was probably her weakest performance of the last three years of her young career. But against what she portrayed in House at the End of the Street, her performance as Katniss Everdeen was truly Oscar-worthy. Because unfortunately, Lawrence doesn't get to do more than walk around in a skimpy top with an annoyed or frightened look on her face in this average thriller. Her character is just so superficially drawn that even with the best will in the world, Lawrence fails to fill it with life or make it interesting. And that's a real shame given her such obvious talent.

But the other actors, most notably Elisabeth Shue, also sell themselves completely short here. Director Mark Tonderai obviously tries to enhance the not exactly original story with atmospheric tension. He even manages to do that quite well here and there, though stale clichés and flat dialogues keep throwing bad stumbling blocks in his way. The result is a somewhat indecisive production that isn't really horror, but tries too hard to be that the whole thing could still pass as a pure thriller.

Neither the surprising twist, nor the fast-paced finale can really convince. Suspense comes up far too seldom, which is why the film might appeal more to viewers who can't stand the sight of blood (there's very little of that here, after all) and can already get pleasantly creeped out by very mild teen horror. But if you're hoping for real goosebumps or shock moments or want to see a really good Jennifer Lawrence, you won't even come close to getting your money's worth with this average product. Therefore: only very conditionally worth seeing!

Cinema trailer for the movie "House at the End of the Street (USA/Kanada 2012)"
Loading the player ...