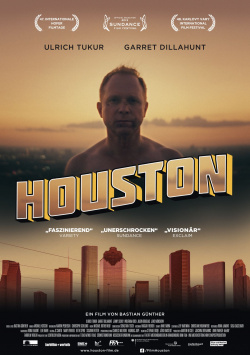 Headhunter Clemens Trunschka (Ulrich Tukur) is facing the abyss. His excessive drinking threatens to destroy not only himself, but also his marriage and his work. Only with great effort can he keep up appearances of functioning well. When he is hired by a major automobile company to recruit Houston Petrol's American CEO, Steve Ringer, as its new chairman, Trunschka knows this is his last chance. If he blows this assignment, he'll be out of the picture for good. And so he does everything he can to make contact with the publicity-shy Ringer. After his first attempt at a conference in Germany fails miserably, he has no choice but to travel to Houston and try his luck there. But even in the USA it proves almost impossible to get close to the constantly shielded CEO. Only when Trunschka meets the businessman Robert Wagner (Garret Dillahunt) in his hotel, he gets new hope. For Wagner has contacts who could help him considerably. But as his friendly helper becomes more and more intrusive, Trunschka threatens to finally lose control of the situation and, with it, his entire life.

Houston is, at its core, a very interesting drama about one man's desperate struggle against his professional and personal decline. On the one hand, the film has some very strong aspects, but on the other hand, it also has some spoilers that unfortunately get in the way of a positive overall picture. Among the positive aspects are undoubtedly the actors. Ulrich Tukur gives a strong performance, which is on the one hand very reserved, but at the same time extremely powerful. Tukur manages to believably portray how much Trunschka has to fight against his inner demons, knowing full well that alcohol is close to pushing him to the social sidelines. Garret Dillahunt (No Country for Old Men, Looper) is the exact opposite of the closeted German as the uber-friendly American. This contrast makes the scenes between the mismatched men some of the film's strongest moments, as there's also a steady stream of upbeat, well-observed humor.

What also makes the film worth watching is the refreshingly atypical picture of the U.S. that's shown here. Director Bastian Guenther manages to dispense with many of the common clichés and create a very realistic-looking portrayal of Houston and its environs. It's refreshingly different and just great to look at in visual terms alone.

These are actually excellent premises for a successful cinema drama with high show value. But unfortunately, Günther keeps getting in his own way with his artistic ambition, presenting a production that is so unwieldy that it is really only accessible to a small niche audience. Strange camera angles, in which only the torso of the actors can be seen or the person speaking doesn't even appear in the picture, alternate with far too long snapshots that are simply unnecessary for the story. Scenes like the one in which Clemens eats a roll in the car might provide a bit of the right atmosphere, but on the scale presented here they only drag the whole thing out unnecessarily.

It's a shame that there are always filmmakers who go to such lengths to go against the norm - or rather against the nasty word mass taste - that as a result inherently good stories are denied a wider audience. Especially in the case of Houston, the good actors and the dramaturgical as well as visual strengths would have definitely deserved greater accessibility. As it is, however, the work is really only to be recommended to viewers who enjoy somewhat unwieldy and too wornly told program cinema fare.