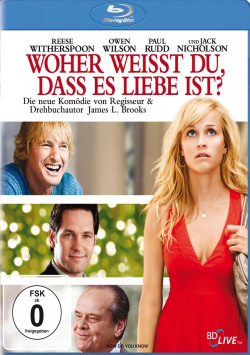 Film: James L. Brooks, co-creator of The Simpsons, has proven with films such as Time of Tenderness, Better Is Not, and News Fever that he has been able to weave together comedy, drama, and romance time and time again with a sure hand to create some very great, often award-winning cinematic entertainment. In his latest, How Do You Know It's Love, Brooks once again proves himself a master of his craft.

The story centers on Lisa Jorgenson (Reese Witherspoon), professional softball player at the end of her great career. Lisa numbs her grief over the loss of her previous livelihood with an affair with fun-loving professional baseball player Matty (Owen Wilson), who for the first time sees Lisa as more than just a fleeting one-night stand. But just as this relationship seems to be turning into something serious, the likeable George (Paul Rudd) enters Lisa's life. However, George himself is currently facing the shards of his life, as he is not only facing financial ruin but also a prison sentence due to alleged shady business dealings he made as the head of his father's company (Jack Nicholson). But in Lisa, he finds a pleasant distraction from his problems, and he realizes that life can hold something wonderful even in its darkest moments...

Whoever is expecting a shallow romantic comedy in How Do You Know It's Love won't necessarily get what he/she expects here. Sure, the movie already tells a really nice love story. But this is actually only the hook for the theme, which is the real core of Brooks` movie. Because all protagonists have in common that they are at a turning point in their lives and that they, each in their own way, have to deal with change and learn to accept consequences for their own actions. While Lisa is completely thrown off track, having led her life until now in clearly defined paths accompanied by life wisdom written on little pieces of paper, George at first rather tries to run away from his problems. Matty, on the other hand, senses that changes are coming his way with Lisa, but he doesn't quite see why they should come from him. And Charles, finally, doesn't think to change his life, preferring to pass the consequences of his actions on to his son.

In the course of the film, all the characters go through more or less significant changes that bring some people together, others apart. It's thanks to the wonderful dialogue penned by James L. Brooks, as well as his sensitive direction, that this story is almost entirely free of cheesiness and clichés, while still providing crowd-pleasing Hollywood entertainment for the heart, brain, and laugh muscles. Brooks has the well-chosen ensemble of actors to thank for the fact that his words, carefully put to paper, have also been appropriately transported to the screen.

Reese Witherspoon is convincing with a mixture of strength and vulnerability that makes her likeable and endearing n every second. Paul Rudd seems like the perfect man for her, as he too is just lovable despite all his quirks. But also Owen Wilson plays the role perfectly tailored to him in a quite charming way, so that Matty, who is embodied by him, is also quite suitable as a partner for Lisa, even if he is not really a match for her intellectually and his morals don't exactly speak for a lasting relationship either. The fact that Brooks has portrayed all three protagonists of the romantic triangle sympathetically in their very own way, the outcome of the story remains quite exciting despite a certain predictability. The same can be said for the father-son relationship, which Jack Nicholson, somewhat underemployed here, perfectly nails at the end with just a slight change in his facial expressions.

How do you know it's love? is certainly not James L. Brooks' best film. But it's a perfect example of how good Hollywood romantic entertainment can also offer depth of content, clever dialogue and multi-layered characters, and can also commit to a pace all its own that pleasantly avoids the typical narrative patterns of other US comedies. A wonderfully written and no less charmingly acted film that is absolutely worth seeing despite minor weaknesses!

Picture + Sound: Technically, the Blu-Ray can fully convince. While the sound remains genre-related rather restrained and lives primarily from the dialogues and the music, the very clean picture can inspire with a brilliant sharpness, the good color mixing and the convincing contrasts. Very good!

Extras: The bonus material begins with a very good audio commentary by director James L. Brooks and cinematographer Janusz Kaminski. The very candid, good-humoured commentary provides a good insight into the production and is highly recommended, especially for fans of the director. Owen Wilson joins Brooks for a second commentary, though it's not available for the entire film, only for just under 36 minutes of select sequences.

Continue with just under 30 minutes of cut scenes, with optional commentary by James L. Brooks. Among other things, the scenes offer a deeper look into Lisa's childhood, give Jack Nicholson a bit more to play with, and also offer the original ending. There are some very pretty moments, but only a few scenes would have really enriched the finished film.

Nearly two minutes of more or less funny spoilers, a 15-minute standard making of, a very interesting conversation between Brooks and composer Hans Zimmer (approx. 25 mins), an interactive script commentary, and the recipe for the drink that chef Thomas Keller created for the film (approx. 1 min.) are also still included in the bonus package. Good!

Conclusion: How Do You Know It's Love is certainly not James L. Brooks' best film, but it is a romantic comedy with great actors, a good script, and plenty of charming moments. The Blu-Ray is technically on a very good level, the bonus material is good, but not really mind-blowing. Overall, here is a: thoroughly recommendable!