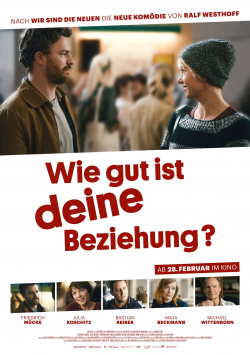 How good is your relationship?

Steve (Friedrich Mücke) and Carola (Julia Koschitz) have been a couple for five years. Routine, but also trust and loving togetherness determine their everyday life. When Steve's best friend Bob (Bastian Reiber) is dumped by his girlfriend out of the blue, Steve also starts to have doubts. Does he really make Carola happy? Does he pay enough attention to her needs? When he is also thrown off track in his job, which is actually going well, the confused Steve embarks on a trip to self-optimization, in which Harald (Michael Wittenborn), of all people, the new boyfriend of Bob's ex, is supposed to help him. But instead of helping his relationship, Steve only makes things worse.

With How Good Is Your Relationship? director Ralf Westhoff (Wir sind die Neuen) returns to the theme that was already at the heart of his films Shoppen and Der letzte schöne Herbsttag: romantic togetherness - or at least the pursuit of it. In the speed-dating comedy Shoppen, Westhoff has staged this in a much more lively and surprising way. But even with a few lengths and a storyline that seems contrived in places, How Good Is Your Relationship still has enough wit and charm to keep viewers very entertained.

Westhoff has a knack for making his characters very likeable despite - or perhaps because of - their all-too-human flaws. He manages to do that again here, which works especially well with Steve, who actually behaves in a way that makes you want to give him a good shake as a viewer, so that he comes to his senses and doesn't sabotage his relationship through his behavior in such a way. A character like that can quickly get on your nerves. But Westhoff's script and Friedrich Mücke's charming performance successfully counteract this. The good chemistry between Mücke and his film partner Julia Koschitz also ensures that, despite all the chaotic pitfalls, you hope that Steve and Carola will get their relationship under control.

How good is your relationship? may be Ralf Westhoff's weakest film to date overall. But the filmmaker has enough talent for comedic, true-life material, both as a director and a screenwriter, that even a film with weaknesses is still amusing and entertaining enough to justify buying a movie ticket. The fine cast and plenty of delightful wordplay make it easy to forgive the few minor hangs in the nearly two-hour comedy. For this there is clearly a: Worth seeing!

Cinema trailer for the movie "How good is your relationship? (Deutschland 2019)"
Loading the player ...