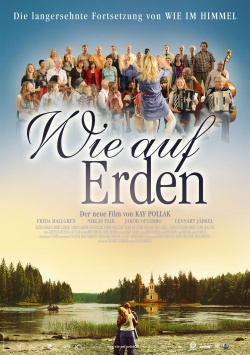 Several months have passed since the death of conductor Daniel. Lena (Frida Hallgren) is left only with the memory of the brief happiness she shared with him in Ljus&aring;ker, and the child she carries in her womb. Other than that, it's not just her life that's looking pretty bleak. Pastor Stig (Niklas Falk) is also down in the dumps. Since Daniel's death, his church is empty again and he can only numb his disappointment with alcohol. Nevertheless, he is on hand when Lena - cut off from the outside world by a snowstorm - needs his help with the birth of her child. Out of gratitude, she now wants to help Stig. Because the church council is desperate to get rid of the drunkard. The church's big anniversary concert, which is even to be televised, offers the perfect opportunity to get rid of Stig. But Lena won't let that happen. She gets a choir together to rehearse a very special version of the Hallelujah from Handel's Messiah. But will the church council be willing to experiment and can Stig's position be saved?

As on Earth is the sequel to the audience favourite As in Heaven, which was a surprise hit in 2005 with 1.4 million viewers. It's taken ten years, but now Pollak delivers the eagerly anticipated return to Ljus&aring;ker and his endearingly quirky characters. However, it becomes clear after just a few minutes that he should have left it alone. For although some of the actors from Part 1 are back - most notably the charming Frida Hallgren as Lena, who is marked by unwavering optimism - and although you quickly feel at home in the small town, the film lacks almost everything that made its predecessor so enchanting.

The characters here seem to be shouting at each other in a tour. There is an over-the-top hysteria here, under which any form of emerging charm is promptly buried. And if the characters don't behave hysterically for once, they still barely manage to build up any real sympathy. Melancholic and often riddled with self-pity, the characters fight their way through an effortfully constructed dramaturgy, which in some moments feels like a copy of the first part, in other moments like a mere collection of clichés. With a running time of over two hours, the whole thing is then unnecessarily dragged out, so that you really don't feel like you're in heaven anymore.

The first part also had its weaknesses. But it seemed somehow real and heartfelt. As on Earth, on the other hand, just feels contrived and too cramped to win the audience's favor. So Pollak keeps weaving scenes into the story that cry out to make the audience smile and let the sun rise in their hearts. But unlike in part 1, these scenes just don't arise believably out of the story, but just come across as manipulative and somehow soulless. As a result, As on Earth is once again a sad example for the fact that some movies just shouldn't be continued. This uninspired looking work is only a shadow of its predecessor and a major disappointment in almost every way. Even then, if like me you really, really liked Like in Heaven, you should think twice about buying a movie ticket for this overlong and unnecessary sequel. For this there is also only a not so heavenly: Very conditionally worth seeing!

Cinema trailer for the movie "As on Earth (Schweden 2015)"
Loading the player ...