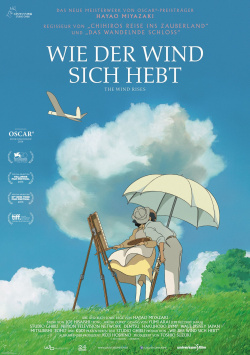 How the Wind Rises

One of the great masters of animation is retiring from the film business: Hayao Miyazaki, founder of the legendary Gibli Studio and creator of masterpieces such as Chihiro's Journey to Wonderland and The Walking Castle, presents his last official directorial work with How the Wind Rises. Primarily known for his imaginative, fairy-tale anime films, Miyazaki's swan song surprises with a very adult, historical tale told in his usual visually stunning manner, but also with a slowness that takes some getting used to.

The story, inspired by real-life events, centers on a young aircraft engineer named Jiro Horikoshi, who has been captivated by the dream of flying since early childhood. Like his great idol, the Italian Gianni Caproni, Jiro wants to one day fly over Japan in a plane he has designed himself. While still studying in Tokyo, his great talent is recognized and it isn't long before he rises to become one of the elite engineers in the country's defense industry. Soon he begins to revolutionize the traditional aircraft manufacturing industry with his ideas and gets closer to his very big dream. One day, when he meets again the beautiful Nahoko, whom he had met years ago on his first train ride to Tokyo, he realizes that there are other things in life worth developing great passion for. But his newfound happiness soon threatens to be shattered.

As a parting shot, the dream sequence that begins How the Wind Rises once again shows the Hayao Miyazaki his fans know and love: imaginative, playful, and enchanting. At the same time, the scene seems as if the director wants to emphasize quite clearly what kind of film his last work will not be by the rather clear break between such dream sequences and the story interspersed with real events. The Great Kanto Earthquake of 1923, political changes in the country before World War II, the Great Depression, or even the consequences of Japan's entry into the war on Jiro's work and life are just not necessarily topics you would expect from a typical Miyazaki film.

However, just because he always adds some typical elements to the very dramatic and sometimes sad story and lightens it up with a little bit of humor, Wie der Wind sich hebt (How the Wind Blows) comes across as a real Miyazaki through and through. Once again he succeeds in disproving the prejudice that animated films are automatically children's films, which is unfortunately still too widespread in Germany. For unlike Ponyo, for example, Wie der Wind sich hebt is a very adult work that could not be further away from what is currently offered to children in animation, not only dramaturgically but also in terms of look and pace.

The story takes place over a period of several decades. Miyazaki takes a long time to tell the story of Jiro, a conglomerate of aircraft engineer Jiro Horikoshi and writer Tatsuo Hori. This does require a certain amount of patience on the part of the audience, as some moments are really dominated by distinct slowness. But it's worth it to get involved with the carried tempo and the extensive story. Only then it becomes clear that Miyazaki's last movie really is a small masterpiece and a great ode to the beauty of life. How the Wind Rises beautifully shows how important it is to follow your dreams and live your passion - something that certainly applies to the director as well. If you love Hayao Miyazaki's films and can accept the fact that this time he's not telling an imaginative fairy tale, then you definitely shouldn't miss the most successful Japanese film of 2013. Absolutely worth seeing

Cinema trailer for the movie "How the Wind Rises (Japan 2013)"
Loading the player ...