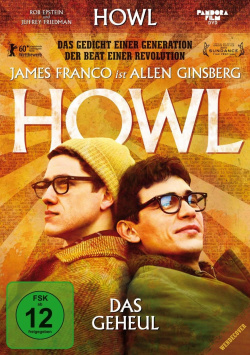 Film: The poem Howl not only made Allen Ginsberg famous in one fell swoop in the late 1950s and an idol of the so-called Beat Generation. It also landed the poet squarely in court, because in prudish America, Ginsberg's words were considered nothing more than obscene. The poem's already not very large print run was confiscated and its publisher Lawrence Ferlinghetti was put on trial. This trial sets the scene for Howl, a fascinating cinematic take on the poem that, in keeping with Ginsberg's spirit, eschews convention and is likely to divide interested audiences.

There is no question that lead actor James Franco, in particular, delivers a superb performance as Allen Ginsberg. Especially in the original English version, it's clear how well Franco has nailed the tone of this poem. He recites the poem, which consists of three parts and a footnote, interspersed with brief interview segments and scenes from the trial, in which Mad Men star Jon Hamm as defense attorney Jake Ehrlich and David Strathairn as prosecutor Ralph McIntosh engage in fascinating exchanges.

What ultimately makes Howl - The Howl so special, however, is the visual realization of the poem. Sometimes the viewer sees here Franco as Ginsberg reciting in front of an enthusiastic audience, then again various game scenes, image montages and even very original animations, in which the sometimes very confusing content of the poem, in which Ginsberg has also made use of self-invented word creations, to translate into a no less intelligent visual language. However, you have to get involved with the poem, let yourself be swept away by the waves of words, in order to be fascinated by this visual realization as well. Otherwise, the film can come across as exhausting very quickly.

In the end, Rob Epstein and Jeffrey Friedmann's film makes it impressively clear that cinema can offer not only good entertainment, but also real art. Thus, Howl - Das Geheul has a hard time finding a broad audience, but interested arthouse lovers will definitely enjoy the film. My tip: read the poem beforehand, then you can fully concentrate on the fascinating imagery and the great actors!

Image + Sound: Especially the animated sequences come out well on the DVD. Thanks to the carefully matched contrasts, the coherent colour scheme and the good overall sharpness, viewers who missed the film in the cinema can therefore also adequately enjoy the extraordinary imagery. The rather discreetly mixed sound is of course dominated by the dialogues, whereby here the more authentic sounding original English version is clearly preferable. Good.

Extras: In addition to a trailer show from the provider, the DVD also has a making of on board, which is quite extensive at 40 minutes. Pleasantly commercial-free, the documentary goes into detail about the making of the film, the background, the cast, the locations and other aspects of the shoot, making it a more than worthwhile addition to the film.

Conclusion: Howl - The Howl is artful cinema at its best. First-rate actors, engaging dialogue and mesmerizing imagery make this film an arthouse experience of a very special kind. Technically, the DVD does the production justice and the accompanying making of provides some very interesting information about the making of this work. Nothing for the broad mass taste, but for brave cineastes absolutely recommendable!