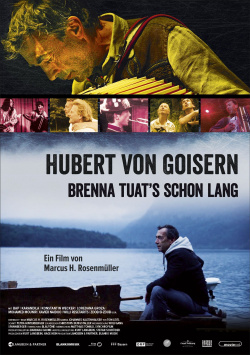 Hubert Achleitner discovered his love of music at an early age. And it was clear to him just as early that he didn't want to be pigeonholed. And so in the mid-80s, as Hubert von Goisern with the Alpinkatzen, he became probably the most important representative of alpine rock. With the song Koa Hiatamadl, the mixture of traditional folk music and rock even made it into the charts, laying the final foundation stone for the studied musician's career, which continues to this day. In the following years von Goisern tried again and again to develop himself musically, to try out new things and in doing so to always think outside the box. He rarely kept his socio-political views behind him and was thus given the reputation of a lateral thinker. But even if some of his songs are known to an audience of millions, few know anything about the person Hubert von Goisern, about his social commitment and his really exciting, varied career. Successful director Marcus H. Rosenmüller (Wer früher stirbt ist länger tot) now wants to change that with his first documentary Hubert von Goisern - Brenna tuat`s schon lang.

In the film the career of the musician is traced on the basis of numerous archive recordings and very detailed interviews. The emotional highlight is certainly von Goisern's meeting with his old music teacher, who recognised his pupil's great talent early on. But also his first live performance, his visit to the behavioural scientist Jane Goodall in Tanzania, his attempts as an actor or even the end of his time with the Alpinkatzen are dealt with honestly and in detail. The documentary devotes a lot of time to a very special concert project: the Linz Europe Tour. Over a period of two years von Goisern and his team sailed through Europe to play in various cities with local musicians and to show through music that despite cultural, political or religious differences we are all somehow the same.

The special thing that Marcus H. Rosenmüller manages to do with this film is that as a viewer you don't have to be a fan of Hubert von Goisern and you don't even have to like his music to be carried away by the man and what he has to tell. Despite a few short lengths, Hubert von Goisern - Brenna tuat`s schon lang has become a highly interesting and also rousing artist biography, which lives from the very open conversations and the many insights away from the stage. Entertaining, entertaining and therefore: absolutely worth seeing!