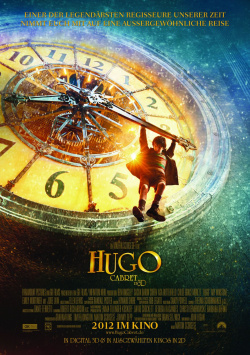 Martin Scorsese is undoubtedly one of the most important filmmakers of the last thirty years. With films like Taxi Driver, Goodfellas or Departed Scorsese has written film history. Scorsese's work has always been first-class and usually very demanding, but his previous oeuvre can't really be described as family-friendly cinema entertainment. But now Scorsese has dared to make a 3D film for the whole family and has created another masterpiece.

Nominated for 11 Oscars, Hugo Cabret is the imaginative film adaptation of Brian Selznick's wonderful bestseller The Discovery of Hugo Cabret. It tells the story of twelve-year-old Hugo (Asa Butterfield), who moves in with his uncle (Ray Winstone) after the death of his father (Jude Law), a genius inventor. The latter lives within the walls of a Paris train station and is responsible for ensuring that all the clocks there always work perfectly. When his uncle disappears, Hugo is left to fend for himself. Always anxious to avoid the station policeman (Sacha Baron Cohen), Hugo desperately tries to repair the only memento of his father, a mechanical man. He hopes that there is a message for him hidden in the automaton man. He secretly procures spare parts from a grumpy toymaker (Ben Kingsley). When he is caught by the old man on one of his hauls, the boy's scheme threatens to fail for good. But he has no idea then how much his life will be changed by meeting old Georges Méliès and his niece Isabelle (Chloe Grace Moretz)...

Before I pour out all praise on Hugo Cabret, let me address the only real criticism. The problem is that Hugo Cabret is being sold as a children's movie. That is so not accurate. Even though the book is aimed at slightly older children and teens, the story, like Scorsese's film, is far more than just an adventurous tale about an orphan boy. It is also a great declaration of love to the beginnings of film and to Georges Méliès, one of the great visionaries of the silent era. While the Georges Méliès in the story is a fictional version of the legendary filmmaker, his work plays an enormously important role. And this aspect of the story could be less tangible and almost boring for children, precisely because Scorsese has directed it with complete dedication and great passion. In other moments, however, such as when Hugo is chased through the station by the stationmaster, young viewers again get their money's worth.

So the film eludes a clear target audience. Too complex for children, perhaps too playful for many adults, the film might have a hard time appealing to a broad audience in Germany, as it already has in the US and other countries. And that is really a shame. Because even if the staging sometimes seems a bit unbalanced, Hugo Cabret is in many respects simply a quite wonderful film, which the love of its maker for the cinema and the story can be seen in every moment.

The wonderful set, which adheres very closely to the drawings from the book, takes the viewer from the first second into the magical world of Hugo Cabret. Here it also reveals that Scorsese's first 3D film knows how to exploit the possibilities of this technique to the fullest. This is where three-dimensionality really makes sense. Admittedly, the whole thing is also quite a wonderful cinematic experience in 2D. But unlike many other 3D films, the effect here is not just a gimmick, but part of the story. The fact that Scorsese uses the most modern technology to pay homage to the beginnings of cinema is an absolutely brilliant idea, thanks to the loving realization. For in this way Scorsese succeeds in making even younger viewers aware of the magic that emanated from the first moving pictures.

Fortunately Scorsese doesn't get too lost in his homage to the silent film era and in his shenanigans with 3D. So then the really very nice story about Hugo, Isabelle and the mystery of the automaton man can unfold. With a lot of emotion, a little humor and suspense, Scorsese has absolutely adequately adapted the novel by Brian Selznick. However, this is also a credit to the fine ensemble of actors. While Borat actor Sacha Baron Cohen is more responsible for the comedic aspects of the film, especially Ben Kingsley, Michael Stuhlbarg and Christopher Lee deliver wonderful performances. At the same time, the experienced actors give their two young colleagues Asa Butterfield and Chloe Moretz (Kick-Ass) enough room to convince the audience of their talent.

Wonderful imagery, an enchanting story, great acting and superb 3D visuals make Hugo Cabret one of the finest declarations of love for cinema to be seen in recent years. Maybe not really a children's movie, but definitely a must-see for all big and small moviegoers who haven't forgotten how to dream yet and who can still be enchanted by the magic of cinema today. Absolutely worth seeing!!!