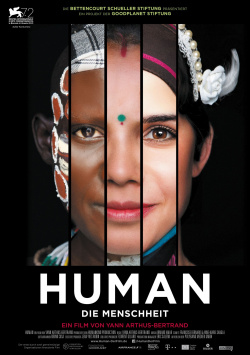 What is being human? What makes a human being? What makes him love, what makes him suffer? What makes people happy, what makes them hate? Is man really the crown of creation or rather a freak of nature? And is there something that connects us all, despite all cultural, religious or social differences? Filmmaker Yann Arthus-Bertrand explores these questions in his elaborately staged documentary project Human - Die Menschheit. Over a period of more than three years, Arthus-Bertrand and his team travelled through 60 countries and interviewed people in 63 languages. The filmmaker got a total of 2000 people in front of his camera. He has edited their stories and statements into a colourful kaleidoscope, which is repeatedly interrupted by spectacular aerial shots of wonderful landscapes or fascinating scenery.

This has at times a high show value and also offers some thoroughly fascinating moments. And yet, the two-and-a-half hour film has some major problems that make it a very plodding affair. There's the fact, for instance, that many of the stories and statements leave you with the feeling that the world is all suffering, war and poverty. Even with positive themes, some bad things seem to resonate, be it disease, wars, or exploitation. There is no question that the intentions of the makers were laudable. But the film's advertised richness of facets is simply lost in too many moments to show viewers how much suffering there is on our planet. And in the long run this is just too exhausting and also seems a bit one-sided.

Another problem is that as a viewer you are confronted with constantly changing protagonists. The mass of people, as well as the short time they are on screen, makes it almost impossible to build up an emotional connection to them. And so after a while you just lose interest in what is being told here. Especially since a lot of stories go in a similar vein and thus can hardly stay in your mind for a long time. Too often you get the feeling that Arthus-Bertrand wants to make the audience feel something, and this is in contrast to the advertised versatility that is supposed to be shown here.

Human - Humanity is, at its core, a very interesting project, executed with commendable ambition. The film has some moving moments and some great imagery, but comes across as very doctrinaire and manipulative for long stretches. Moreover, at well over two hours, it is far too long. This proves once again that a good idea alone doesn't make a good movie. A more differentiated approach to the actual diversity of mankind would have been desirable. Only with cutbacks worth seeing!