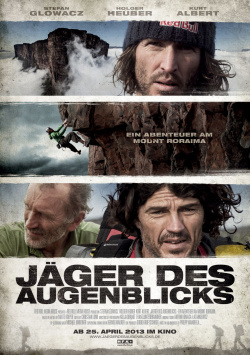 Hunter of the Moment

Stefan Glowacz is one of the very big stars of the sport climbing scene. In addition to winning quite a few competitions, he has also appeared in films by Willy Bogner (Fire, Ice & Dynamite) and Werner Herzog (Cry of Stone), as well as several documentaries. And Glowacz has also made a name for himself as a lecturer and as an entrepreneur in recent years. One could actually think that these successes completely exhaust him. But far from it. Glowacz is always on the lookout for new challenges. In 2010, Glowacz found just such a challenge in climbing the legendary Table Mountain Roraima in the border triangle of Brazil, Venezuela and Guyana, which he wanted to take on together with his long-time climbing partner Kurt Albert and the extreme athlete Holger Heuber. But already the way to the mountain, which the men wanted to cover without technical aids, made it clear how difficult this expedition was going to be. When, after a few gruelling stages, the helping porters have to give up, as the path through the jungle can only be mastered by experienced climbers, and the route becomes dangerously slippery due to constant rain, the undertaking is already in danger of failing before the Roraima is even reached. But the most difficult test is yet to come for Glowacz and his companions.

Hunters of the Moment documents the spectacular and very dangerous tour of the climbers in breathtaking images, with which the cameramen Kolja Brandt (North Face) and Franz Hinterbrandner (At the Limit) allows the viewer to participate in the exertions, the successes and setbacks of the men. The extreme closeness to the protagonists is one of the reasons why this documentary works so well. Because even if the images of the actual climbing, the shots down the steep rock face or the aerial shots, are really breathtaking and sometimes downright dizzying and sometimes lead to a violent adrenaline release, a good film can not live on such images alone.

The viewer lives through the ups and downs on their journey with the climbers, witnesses very amusing moments, but also more emotional episodes. This creates a certain bond with the protagonists, which is why the last third of the film feels particularly intense. Here it becomes clear that Hunters of the Moment is more than just a simple extreme sports documentary, more than just a very real adventure film, but also a deeply human drama about friendship, respect for nature and for his fellow man, as well as about dealing with grief and personal defeats.

But first and foremost, of course, the climbing and the fascination of nature around Table Mountain are in the foreground of the exciting and captivating film to the last minute. If you already got sweaty hands during the climbing tour of the Huberbuam in Am Limit, you will be literally pressed into the cinema seat with tension in some scenes here. A really great documentary, for which not only climbers will be enthusiastic. Absolutely worth seeing

Cinema trailer for the movie "Hunter of the Moment (Österreich 2012)"
Loading the player ...