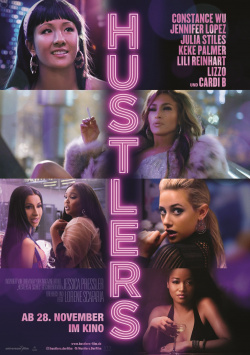 New York in the early 2000s: Young Destiny (Constance Wu) is trying to get by with a job at one of the city's hottest strip clubs. At the beginning she doesn't really want to succeed. It's not until she takes Ramona (Jennifer Lopez), the club's star dancer, under her wing that things start to look up for Destiny. Ramona teaches her how to get as many dollars as possible out of the pockets of the men, most of whom are rich Wall Street brokers. As a team, the two are unbeatable and Destiny earns more money than she ever dared to dream. But then comes the great crash of 2008 and with it, their lucrative source of income peters out. The dream seems to be over. But the women are not so quick to admit defeat. After a short time out, they find each other again and, together with their colleagues Mercedes (Keke Palmer) and Annabelle (Lili Reinhart), they manage to clean out their former customers once more. But the more successful they become at it, the more they also seem to lose control of their not-so-legal enterprise.

Based on true events, Hustlers tells of a group of women who skillfully exploit the weakness of men who feel extremely powerful themselves in order to live a life of luxury and self-determination. It's very well played, especially by Constance Wu and Jennifer Lopez. And Lorene Scafaria also knows very well how to spice the whole thing up with a lot of pace, tongue-in-cheek wit and a fair amount of eroticism, so that in the end we have an entertaining piece of work, the message of which is a little dubious, though. Because even if most of the men, who are ripped off by the ladies, are real creeps, with whom one has now really no sympathy, the ladies commit here nevertheless clearly a crime, which should not be glorified.

Now one can counter that in most Heist movies the crooks are stylized to heroes. Sure, but movies like Ocean`s 11 or the female counterpart Ocean`s 8 are pure fiction, whereas Hustlers is based on a real case. Of course, reality is also exaggerated here. Nevertheless, a more differentiated view on the criminal energy of women would have been desirable. Apart from that, the movie is really good entertainment cinema. It shows how easy it is to succumb to the lure of quick money and how quickly money can also become a real test for a friendship.

And that's what Hustlers is really about: it's the story of a friendship that is born out of necessity and seems to be the only true thing in a world full of illusions and lies. In that respect, the whole thing works really well, especially since you're reminded once again that Jennifer Lopez can be a really good actress. As a retelling of a true story a tiny bit questionable, as pure cinema entertainment more than successful and therefore also: absolutely worth seeing!