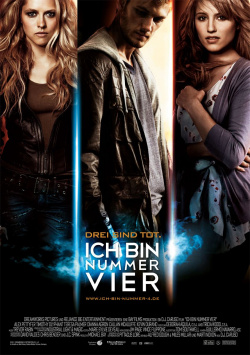 I am Number Four

After the destruction of his home planet, a boy with superpowers comes to Earth. No, the new film from D.J. Caruso ("Eagle Eye") is not the new "Superman" flick, but a fantasy thriller for the "Twilight" generation.

"I Am Number Four" tells of John (Alex Pettyfer) one of eight children who escaped the destruction of their planet. Since then, Number Four, along with his protector Henri (Timothy Olyphant), has been on the run from a galactic hit squad trying to destroy all eight surviving children. John tries to live a normal teenage life, but the constant fear of his pursuers, as well as his ever-growing powers, make this nearly impossible. When he meets and falls in love with the attractive Sarah (Dianna Agron from the series "Glee") after changing locations again at his new school, he hopes to finally settle down in this place. But then he learns that the first three survivors have already been killed and he, number four, is now next in line to be targeted by the killers. They are already on Earth and have latched onto his and Henri's verses. But John doesn't have to face his powerful enemies alone.

"I Am Number Four" is not really a bad movie. Some scenes are very exciting and effectively directed, and Timothy Olyphant in particular delivers a very watchable performance in his rather small role, and Teresa Palmer ("Duell der Magier") is also well cast as a struggling alien Amazon. But overall, the film feels more like a good pilot episode for a fantasy TV series than a major motion picture. What the viewer gets to see here is hardly different from what series like "Heroes" or "Smallville" have to offer. Even the effects are only partially worthy of a major motion picture production, and at times bring back rather unflattering memories of "The Legend of Aang", where likewise it was often only funny lights on the main character's hands that were meant to amaze the viewer.

Another problem with the film is that the romance between John and Sarah, which is tailored to teenagers, barely sparks. You may think what you will of Robert Pattinson, but the "Twilight" mime has a certain charisma despite his rather colorless character in the popular vampire series. And that's exactly what Alex Pettyfer lacks. The mime, who is also soon to be seen in the fantasy romance "Beastly", may be considered the new teen idol, but here he fails to leave a lasting impression. He comes across as absolutely interchangeable and pale in every scene, which of course leads to the same being true for the romantic moments between him and Dianna Agron, who at least has a bit more star power than Pettyfer due to her role in the hit series "Glee".

"I Am Number Four" is so clearly designed as the start of a new film series that the makers didn't even bother to tell a concluding story with fleshed-out characters. The film feels like one exposition that comes to an end as soon as something like suspense is finally established. Granted, the story about the alien orphans with supernatural powers provides a good basis for exciting fantasy action with a decent touch of teen romance. But after this unspectacular and only partly convincing start, it can be doubted that we will get to know number five, seven and eight (number six already plays an important role here). And really it's not a pity.