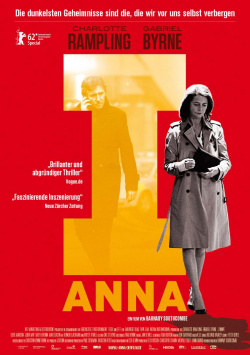 Only at the urging of her daughter Emmy (Hayley Atwell) does lonely Anna (Charlotte Rampling) agree to take part in speed dating. The event culminates in a one night stand that seems to have come to a terrible end. For Anna's chance acquaintance is found murdered in his apartment the next morning. Investigating detective Bernie Reide (Gabriel Byrne) sets his sights on Anna after a fleeting encounter in the high-rise where the dead man lived. Not because he thinks she's a suspect, though, but because he's been so fascinated by the mysterious stranger since that encounter that he can barely concentrate on investigating the murder. He finally manages to get to know Anna. Too late, Reide realizes that he has become entangled in a web of lies and deadly secrets.

I, Anna is already the second adaptation of the novel of the same name by Elsa Lewin after Solo for Clarinet with Götz George and Corinna Harfouch. Director Barnaby Southcombe, son of leading lady Charlotte Rampling, has not only moved the story to London, but also shifted the focus away from the detective to the mysterious Anna. This has some advantages, but also very clear disadvantages. The advantage proves to be that the character of Anna lends itself very well to a gripping psychogram, which Southcombe also draws quite engagingly. The disadvantage is that other characters, especially Bernie Reide, remain rather pale. Also the fascination Anna has for the detective is hardly comprehensible for the viewer, which does not help the emotional impact of the story.

But the biggest problem of the film is its very slow pace. The camera lingers too much in some moments primarily on Rampling's face, letting the actors stumble through the scenery as if in a trance, instead of really pushing the story forward. A slow pace doesn't have to be a bad thing in principle, but if it's at the expense of suspense in a thriller, it's not exactly an advantage.

As interesting as the story is and as good as the actors are, I, Anna is not convincing as a whole. The staging is too unwieldy, the constantly slowed down story offers too little suspense and the convoluted narration is too confusing to really captivate the viewer. Sure, there are also many positive aspects, which are probably enough to make the film worth watching for program cinema lovers with a soft spot for psychological dramas with a noir feeling. But if you're looking for classic thriller entertainment that has more to offer than a main character staggering dazedly through history, you can safely pass up Barnaby Southcombe's feature debut.