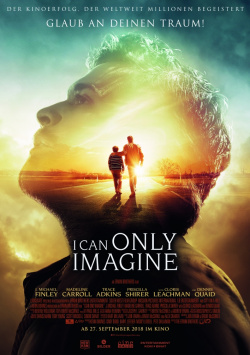 I Can Only Imagine

Bart Millard (J. Michael Finley) looks back on a difficult childhood. Abandoned by his mother, he is left alone with his abusive father (Dennis Quaid). His hopes of escaping the unloved home through his talent at football are dashed by a serious accident. Of all things, he finds his passion for music in the school choir. Immediately after graduation, he takes flight with his band MercyMe and tours the country. His talent is recognized, but the breakthrough fails to materialize. Just when Bart is about to give up hope, he writes a song that will permanently change his life and the lives of many others.

I Can Only Imagine by the band MercyMe is considered the most successful Christian rock song of all time. The song, in which singer Bart Millard comes to terms with his difficult relationship with his father, has moved and inspired many people, especially in the United States. The Erwin Brothers drama traces Millard's journey that led him to compose this hit song. It starts off very promisingly. The production lacks any form of originality, but it is very entertaining and also moving, especially in the first hour. And when J. Michael Finley is also allowed to poke fun at the fact that he actually looks far too old in the role of the teenage beard, you can even detect a hint of irony.

But all that disappears more and more in the second half. Relatively abruptly, a very penetrating Find God and he will show you the way message is beaten into the viewer. In principle, there is nothing wrong with what the film wants to tell its audience. After all, what the song was to many people is meant to be conveyed through the film. But the way it's done is a bit too bold. This is a pity in so far as the beginning showed very well that the message of hope, forgiveness and love can also be conveyed subtly.

Compared to other Christian films from the USA, which in recent years have also repeatedly made their way to Germany, I Can Only Imagine may be one of the better and more restrained. After all, the whole thing is more of a musician biopic than a Bible lesson enriched with pathos. But since the Praise the Lord moral hammer is swung more and more obtrusively towards the end, there remains - even for me as the son of a pastor - a somewhat unpleasant aftertaste at the end, which also pushes the overall impression from positive to na yes. Therefore, under the stroke of a: Only with cutbacks worth seeing!