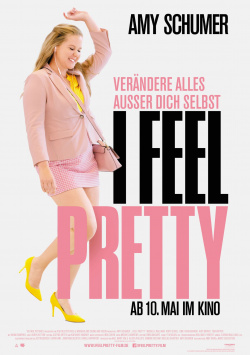 Renee Bennett (Amy Schumer) has lovely friends, a steady job and a small apartment in New York City - what more could you want? Still, she's miserable, especially when she looks in the mirror. She knows the world belongs to the beautiful and attractive - and she just doesn't count herself among them. When she hits her head hard on the floor in an accident during a spinning class, everything changes: from now on, Renee believes she is suddenly blessed with incredible beauty. Her firm belief in this gives her tremendous self-confidence, which she even uses to land a dream job at the Fifth Avenue headquarters of cosmetics giant Lily LeClaire. Now Renee is in a whole different league - even when it comes to men. But her best friends aren't at all happy with this new Renee, and Renee herself soon finds out that beauty isn't everything after all.

I feel pretty actually conveys a very nice message: attractiveness is in the eye of the beholder and true beauty comes from within. The moment Renee believes that she is beautiful, she is also noticed by the people who have so far overlooked the hitherto shy, unimpressive woman. At the same time, Renee realizes that the women she has admired so much for their beauty and success are also struggling with everyday problems, shortcomings, and worries. It's well-intentioned, but the execution is unfortunately a bit lacking.

Admittedly, Amy Schumer (Dating Queen) is fully in her element here. Even though some critics have accused her of being too attractive and good-looking for this role, the character of Renee is really written all over her. The scenes between her and Rory Scovel are very charmingly realized and reveal the potential of the comedy, which unfortunately is otherwise rarely fully exploited. Especially in the first third there are hardly any real laughs generated and the story just ripples along. It's only when Renee takes the job with Avery LeClaire - wonderfully affectingly played by Michelle Williams - that the pace and gag density pick up a bit.

Despite this, the film never manages to jump above average. When at the end the usual moral cudgel is unpacked and the whole thing culminates in a very predictable happy ending, any chance to treat the good topic with a hint of satirical depth or relevance of any kind is gone. Despite some amusing moments and a well-performed Amy Schumer, there is therefore in the end only one: Worth seeing with reservations!