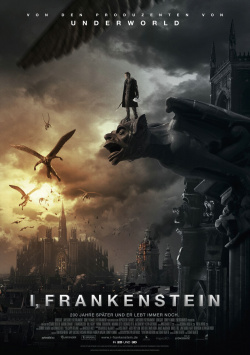 The story of Dr. Victor Frankenstein and the monster he created is a classic of horror literature that has been adapted to film in many different variations. Based on the graphic novel of the same name, I, Frankenstein approaches the myth from a whole new angle. At the center is Adam (Aaron Eckhart), the monster created by Frankenstein. After murdering his creator's wife out of sheer hatred for him, he retreats into complete solitude. 200 years later, he lives in the city of Darkhaven, where, after a fight with a demon, he is drawn into the long-running war between the Gargoyles and the demons. This is about to reach its climax, as head demon Naberius (Bill Nighy) is on the verge of finding a way to transport the souls of his slain underlings back from Hell into the bodies of the dead. With the help of the zombie army thus created, Naberius intends to make humanity his subject. The final piece of the puzzle lies hidden in Adam's origins. Leonore (Miranda Otto), the leader of the Gargoyles, is determined to prevent this secret from falling into Naberius' hands at all costs.

I, Frankenstein was penned by Stuart Beatti (Pirates of the Caribbean) and Kevin Grevioux, co-writer of the Underworld saga. This proximity to latex vampires is definitely evident in the dark fantasy spectacle. Not only the look, but also the story itself show a certain similarity, whereby the fight between vampires and lycans has just been replaced by the war between gargoyles and demons. If you liked Underworld not only because of Kate Beckinsale's sexy outfit, you will surely enjoy I, Frankenstein as well.

But unfortunately this doesn't mean that Stuart Beatti succeeded in making a particularly good fantasy flick. For apart from some good action sequences and visually handsomely realised effects, the battle against head demon Naberius, played by Underworld head vampire Bill Nighy, has few truly compelling aspects to offer. The dialogue feels like it came out of a fantasy B-movie handbook, the actors - most notably Jai Courtney (Die Hard - A Good Day to Die) - act more woodenly than Pinocchio, and the story doesn't have a shred of originality to offer either. None of this would weigh so heavily if the staging revealed a little more guts. But in order to get the lowest possible age rating, any approach that might have been refreshing has been smoothed out to such an extent that the film has been stripped of any form of excitement.

The very appearance of Adam, which has so little in common with the classic Frankenstein's monster, makes it clear how much the makers have played it safe here in order to appeal to the broadest and most undemanding audience possible. But even though there are some moments worth watching, this decision clearly came at the expense of the film's quality. The comic book template could have easily been turned into a dark fantasy tale with plenty of suspense - especially since Adam actually makes the perfect tragic hero. But in this hand-tamed version, stripped of all rough edges, I, Frankenstein is not only not very good and often unintentionally funny. Much worse, it has become downright boring due to its teen-friendly staging.

Good effects, an engaging visual score, a decent lead actor, an amusingly evil Bill Nighy, and a pretty-looking Yvonne Strahovski (Chuck) may be enough to keep the film from becoming a complete disaster. However, these positives are nowhere near enough to make I, Frankenstein a good and truly worthwhile watch. If you really liked every part of the Underworld series and don't care much about dialogue and story construction, you'll definitely enjoy this one. But if you expect an exciting and even slightly surprising fantasy adventure, you will not only wish the demons to hell, but also the makers of this movie. Therefore: only with clear deductions just worth seeing!

Cinema trailer for the movie "I, Frankenstein (USA/Australien 2013)"
Loading the player ...