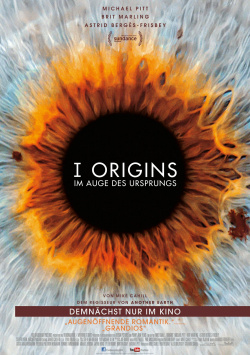 For young molecular biologist Dr. Ian Gray (Michael Pitt), there is nothing more fascinating than the eye. That's why his studies include a theory about the evolution of the eye, and why he never misses an opportunity to take pictures of the eyes of his fellow man. When he meets a mysterious young woman (Astrid Berg&egrave;s-Frisbey) at a party, of whom he only sees the eyes, he is immediately fascinated by their very special uniqueness. A brief moment of passion ensues and the two part ways again. But fate brings them together again and steers Ian's life in an unexpected direction. His research, which he conducts together with his lab partner Karen (Brit Marling), is also influenced by this. Just how much will only become clear many years and a heavy blow of fate later.

I Origins is director Mike Cahill's second feature film starring Brit Marling, following the acclaimed drama Another Earth. But his renewed collaboration with Marling is not the only parallel between his two feature works. Both works share an almost hypnotic visual language that creates a fascinating atmosphere all of its own. This is difficult to put into words, but ensures that the very unagitated production is extremely rousing and captivating despite its rather slow pace. In addition, both films deal with very spiritual issues, packaged in the form of somewhat unconventional love stories.

While Another Earth was about guilt, forgiveness and second chances, I Origins takes on the eye as a window to the soul. The centuries-old argument between religion and science is played out here on a very touching level. While the first half of the film is kept rather straightforward and focuses on Ian's scientific work, the whole thing takes an unexpected turn for the actually very rational Ian after a very dramatic break. In doing so, Cahill leaves it up to the audience to decide whether they want to believe in reincarnation of the soul. What he does make clear, however, is that you should definitely open your mind to things that can't be explained scientifically. Because sometimes you just can't find necessary answers or solace in rationality.

The very understated acting of Michael Pitt, Astrid Berg&egrave;s-Frisbey and Brit Marling blends perfectly with the spherical production, making I Origins a very intense, beautiful daydream, though one that may also be challenging for some viewers. For Cahill revels in slowness, in innuendo, and in his meaning-laden imagery. What may be very appealing to lovers of artful arthouse cinema may just degenerate into pretentious boredom for others. You have to get involved not only with the pace, but also with the somewhat esoteric message. Because then I Origins is a deeply moving love story that lingers long after it's over and makes you think deeply. A beautiful, well-acted and elegantly staged work that deserves a clear worth seeing, at least for friends of American independent cinema!