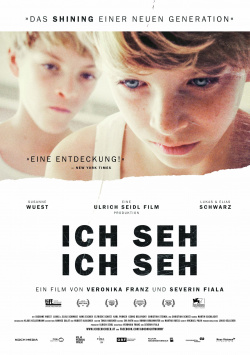 I see I see

It seems to be an idyllic summer for the twin brothers Lukas (Lukas Schwarz) and Elias (Elias Schwarz). In the house right on the edge of the forest, they enjoy their summer vacation, roaming through the forest or exploring the cornfield adjacent to the house. For two boys, it's the perfect adventure holiday. But then the light-heartedness changes abruptly when their mother returns after an accident with a bandaged face. The joy that their beloved mum is finally back lasts only a short time. For the less than affectionate woman, who forbids any form of noise in and around the house and displays a rigorous severity to which Lukas and Elias are not accustomed, has little in common with their mother as the boys know her. Soon the brothers are sure: this woman is a stranger. And they will prove it - at any cost...

I see I see is a disturbing drama that mutates into an intense horror trip after an extremely worn beginning. It becomes very clear in some scenes that co-writer and co-director Veronika Franz is a close associate of Ulrich Seidl, who is involved here as a producer. There are some scenes - especially the visit of two employees of the Red Cross - that clearly bear Seidl's signature. Those who have problems with the films of the maladjusted director in general will have a rather hard time with the typical Seidl moments here, too. But in the case of Ich seh Ich seh, it really is worth fighting through the somewhat tough and exhausting scenes. For as the horror descends upon the secluded country house, it becomes clear that it is the completely understated staging and the slowness of the narrative that are largely responsible for the tremendous intensity of the final third.

Another important factor, however, is the stirring imagery, in which motifs of deceptive beauty alternate with some very disturbing shots. And the acting of the cast, especially the twin brothers, is also what makes this hard-to-categorize work so successful. It's quite an impressive achievement how Veronika Franz and Severin Fiala managed to get such a natural, yet extremely intense performance out of the two boys. A lot of praise is also due to the outfitters, who have made the house virtually the fourth main character.

The resolution, which of course will not be revealed here, is not really a new idea. Those who are a little familiar with the genre might have guessed the final twist a little earlier. But even though the wheel isn't reinvented here dramaturgically, the staging gives it a refreshing element of surprise that ensures this film buries itself deep into the viewer's consciousness. Even then, if you can't get on board with the storytelling and actually just find the film exhausting, it will be impossible to forget it so quickly. No light fare, but one of the most interesting horror scenarios from the German-speaking world in recent years. And for that there is a very clear: Absolutely worth seeing!