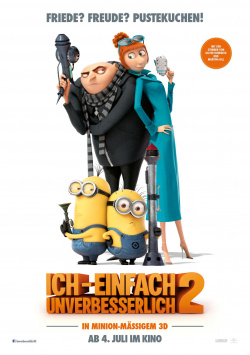 Although Gru (voiced by Oliver Rohrbeck) has hung up his job as a super villain to be a loving father to his three adopted daughters Margo, Edith and Agnes, there is not really peace in his life. So he has to organise children's birthday parties, fend off pushy suitors or look after his Minions, who have been retrained to make jam. Actually, he has enough on his plate and is not at all pleased when he is hired by a secret organization to save the world from a new super villain. Especially since the agent Lucy Wilde (Martina Hill), who gets on Gru's nerves, is supposed to stand by his side. But the longer he hunts down criminals with Lucy and his Minions, the more he enjoys using his rogue talents for good and realizes that Lucy isn't as annoying as he previously thought.

In 2010, Chris Renaud and Pierre Coffin delivered one of the biggest surprise hits of the year with I - Simply Incorrigible. The animated adventure about the super-villain who discovers his heart through three little girls wowed audiences with its mix of biting and at times surprisingly subversive humor, lovable characters, lots of heart - and the Minions. Gru's yellow sidekicks quickly became the real stars of the film, soon conquering the Internet with various clips and short films. After the animation fun with relatively low production costs of 69 million dollars could bring in over 540 million dollars worldwide, a sequel was quickly decided. The danger, of course, was that the sequel would degenerate into a mere copy of the first film. But Renaud and Coffin, who once again took over the direction, fortunately knew how to prevent that.

Naturally, very popular set pieces from Part 1 are again rehashed here in slightly varied form. And again and again directly from the first part is quoted, which one could accuse the film of course as lack of originality. But all in all, I - Simply Incorrigible 2 is a consistent further development of the concept established in the first film, a completely new story with familiar characters. The humor is a little less biting than in the predecessor. Only rarely does something like satire hide under the already funny surface. But that doesn't mean that this sequel is less funny. If you already laughed heartily in the first film, you will definitely find yourself in tears of laughter here.

The Minions are to blame again, of course, with their very special sense of humor, their crazy ideas and with a particularly romantic vocal performance for extremely fun moments. But also the wonderfully cute Agnes and the relationship between Gru and Agent Lucy are full of comedic potential, which Renaud and Coffin fully exploit. In addition, there are countless little ideas with which the story is enriched, through which the fun factor of the film is kept at a very high level throughout.

A fun story, a real gag fireworks, the lovable characters, a few nice 3D effects and the very special humor that already made part 1 so successful, make I - Simply Incorrigible 2 a great cinema fun for the whole family. However, if you couldn't do much with part 1 (there are supposed to be people who couldn't laugh at the Minions!), the corners of your mouth will remain as immobile as if Gru had frozen them with his freezing ray. But for everyone else: Absolutely worth seeing!