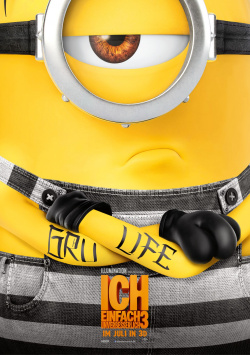 Ex-villain Gru (voiced by Oliver Rohrbeck) and his wife Lucy (Martina Hill) have made it: They both work at the Anti-Villain League and raise their three adopted daughters Margo, Edith and Agnes together. The perfect life, actually. But then Gru botches a mission against villain Balthazar Bratt, a former TV child star. And as a result, he and Lucy lose their jobs. Now, of all times, Gru learns that he has a twin brother who has been looking for him for a long time. Dru wants to convince his brother that they should continue the family legacy together and work as super villains. Gru, however, wants no part of that. It's only when Balthazar Bratt reappears to implement his insane master plan that Gru realizes he desperately needs help to stop this villain.

Seven years ago, Chris Renaud and Pierre Coffin delivered one of the biggest surprise hits of 2010 with I - Simply Incorrigible. The animated adventure about a super-villain who discovers his heart through three little girls wowed audiences with its mix of biting and at times surprisingly subversive humor, lovable characters, lots of heart - and the Minions. Gru's yellow sidekicks quickly became the real stars of the film, soon conquering the internet and children's bedrooms and even getting their own movie after the I - Simply Incorrigible sequel. After Gru's second outing grossed over $900 million and the Minions even cracked the billion-dollar mark with their solo effort, it was clear that more chapters would be added to this success story.

And so now, for the third time, Gru, the girls and the Minions get to go on an adventure together, full of wit and quirky ideas. Especially in the first few minutes, where there is a delightfully wicked reference to Finding Nemo, you then get the feeling that the winning formula has been well varied and still works perfectly. However, it soon becomes clear that this is only the case to a limited extent. There's no question that the film is funny, and the Minions in particular still provide some really good laughs despite their constant presence in toy stores and supermarkets. Still, it doesn't feel as fresh and out of touch as it did with the first installment. The humor is much more direct and not as subversive as in the predecessors. And so slowly the charm of the three adopted daughters wears off a bit.

The team of Pierre Coffin and his co-director Kyle Balda sticks too much to the tried and true formula of success in the third rehash. Sure, it still works and especially with younger viewers the fun factor quickly skyrockets. Still, it would have done the film good if it had left the safe paths here and there to offer not only guaranteed laughs, but also a few surprise moments. Because it would be a pity if this series would wear out at some point, as it is the case with the now almost only annoying Ice Age movies. Neither Gru nor the Minions deserve that.

The German dubbing of part 3 is again very successful over long stretches, which is primarily due to Oliver Rohrbeck, who is allowed to lend his unmistakable voice to two characters this time. There is really not much to criticize in this film. Nevertheless, the great enthusiasm, which has set after the first two parts, is missing, because simply nothing new is offered. But an amusing follow-up of what you already liked the first times isn't wrong! Hoping for a more original fourth part, the bottom line for I - Simply Incorrigible 3 is still a very clear: Banana. ähhmmm. absolutely worth seeing!