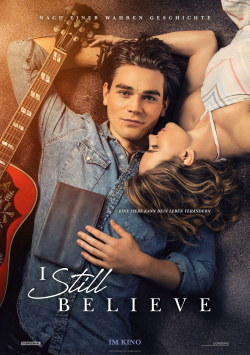 No sooner does he arrive at Calvary Chapel Bible College in California than young musician Jeremy's (K.J. Apa) life changes permanently. First he meets his idol Jean-Luc La Joie (Nathan Parsons), who immediately recognizes Jeremy's talent and takes him under his wing. And then he also meets the enchanting Melissa (Britt Robertson), with whom he falls head over heels. Although their relationship is not under an easy sign, as Jean-Luc has also lost his heart to Melissa, a short period of carefree happiness begins for the two - until this is put to the test by a shocking diagnosis. Jeremy manages to give them both hope and strength with his music - but is that enough to go the hard way to the end?

I Still Believe is the next film from directing duo Andrew and Jon Erwin after I Can Only Imagine: The Song of My Life, which deals with the true story of a Christian rock musician. The story is quite moving, but its execution is only partially convincing. First, the positives: the chemistry between Riverdale star K.J. Apa and Britt Robertson is very cohesive. The beginning of their relationship in particular is wonderfully romantic and, despite an extra helping of kitsch, definitely goes to the heart. The supporting roles are also well cast with Gary Sinise (Forrest Gump) and country star Shania Twain. Even though the script with its rather clichéd dialogues doesn't allow for any really great top performances, there's nothing wrong with the film in terms of acting.

The camera work and the partly very beautiful songs also leave a positive impression. Even if you're not a fan of Christian rock and country music, some of the songs heard in the film really catch your ear quickly - and some go straight to your heart. So far, so good. The movie only gets into trouble when it focuses too much on the Christian aspects of the story - as was the case with I Can Only Imagine: The Song of My Life. It just feels - and I say this as a pastor's son - too much like a sermon that isn't exactly subtly delivered. It just comes across as a tad too extreme, which then dulls the emotional power of the story considerably.

It's good that the real Jeremy Camp found the support in his faith to get through a really tough blow and find new courage to live. It's also nice that he can give courage and hope to others through his music. But the way the whole thing is conveyed here in the last third of the movie is just a bit too thick to be convincing anymore. Apart from that, I Still Believe is quite a beautiful romance that could even move you to tears in some moments. But it is still worth seeing only with small restrictions.

Cinema trailer for the movie "I still believe (USA 2019)"
Loading the player ...