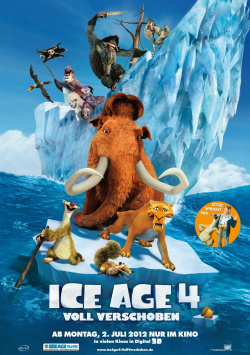 Sloth Sid and his friends are back! For the fourth time, Sid, voiced by Otto Waalkes, mammoth Manni (Arne Elsholz) and sabre-toothed tiger Diego (Thomas Fritsch) experience an exciting adventure in the turmoil of the ice age that is just coming to an end. And of course, the prehistoric rodent Scrat is also back, who still hasn't given up his hunt for his beloved acorn. And it is his appetite for the tempting nut, of all things, that ultimately leads to the continental drift that separates Manni from his wife Ellie and daughter Peaches. Trapped on a small ice floe, Manni, Diego, Sid and his extremely rude grandma try to find a way back to their herd. In the process, they encounter the dangerous orangutan pirate captain Gutt, who captures the four, making a return home nearly impossible. In the process, the situation there becomes increasingly dangerous for the rest of the herd - and Ellie could use her Manni's help all too well...

Ice Age 4 - Fully Displaced is an absolute no-brainer that doesn't really care what the critics say. The film introduces a few new characters, but otherwise mainly plays it safe and gives fans of the series exactly what they expect from an Ice Age movie. As such, Part 4 works well for anyone who had a deliciously good time watching the first three films. But if you look at the film a little more critically, you'll notice a certain lack of imagination in places, which not only manifests itself in constant repetition of familiar set pieces, but also in clear borrowings from other animated films and completely unnecessary elements of contemporary pop culture.

For example, the fact that a younger member of Sid's family comes along with a fashionable Justin Bieber hairstyle and the styled-up mammoth teens chilling by a waterfall to pop sounds in David Guetta style show a demeanor that one usually only knows from princesses with inflated egos from bad MTV docu-soaps is simply not funny, but a loveless pandering to the young target audience. The fact that the characters are allowed to perform funny dance numbers to a rather soulless pop song during the end credits really can't be topped in terms of unimaginativeness, as such dance numbers can be seen in almost every animated film by now.

Also the appearance of orangutan Gutt, who introduces himself to Sid & Co. with a little song, doesn't really bristle with originality, as animation lovers know a very similar sequence from the timeless classic The Jungle Book. And this is exactly the problem of Ice Age 4 - Voll Verschoben: the film is not bad, has some very funny moments to offer and makes especially the small audience laugh heartily. But the whole thing is just more of a fast-food product geared to the just contemporary mass taste and not a film aimed at longevity. Of course, it's impossible to say now whether the Ice Age movies won't still work as well in 20 years as they do today. But while part 1 might have the best chance to do so, the fourth rehash looks a bit different.

Because about a third of the time some animal slides down, falls down or is thrown against something, and therefore the sound Ahhhhhhh makes up a large part of the dialogues, takes away a lot of the charm that made up the first part. For the 3D visuals, these scenes do work really well and even justify the extra cost and the annoying wearing of the 3D glasses. But to become a lasting classic, which the audience will remember after watching the next 3D animated film, it is simply too little.

Who loves Scart, who can still be amused by the typical Otto laugh, who is rather on little subtle Hau-Drauf-Humor and the characters of the first three films has taken to heart, which comes to Ice Age 4 - Fully Displaced simply not past. Some very funny ideas and successful gags conceal the weaknesses too well to diminish the real fans their fun with the animated film. But if you already had the feeling with the third part (which I personally think is much better than the second and this fourth film) that this series shows signs of fatigue and could use some fresh air, you will at most be able to laugh about Scrat and Sid's grandma. Therefore: no particularly original film, which is really only for all Ice Age fans but absolutely worth seeing!