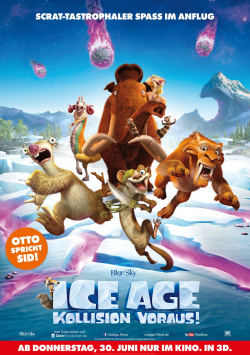 But what a bummer: Scrat just wants to finally have his beloved nut for himself. But no matter what he tries, everything goes wrong. And so he suddenly finds himself inside a UFO sealed in ice, which transports him deep into space. And here, too, Scrat wreaks havoc. This leads to a giant asteroid moving towards Earth and threatening to wipe out all life there. In order to prevent this, the friends Sid, Manny and Diego have to give up their home with their loved ones and embark on a dangerous journey in order to avert the impending end. But they do not suspect that they are not only threatened by danger from space. Also from the world under the ice comes a threat to them, which could put a deadly end to their rescue operation.

Ice Age - Collision ahead! is the now fifth part of the popular series around mammoth Manni, sloth Sid and saber-toothed tiger Diego. The previous parts were never particularly original, but they could at least come up with many good gags and a certain charm. But with part 5, the makers seem to have finally run out of ideas. They throw every trace of logic overboard and fabricate a senselessness, which is qualitatively far behind the (so far) weakest films of the series and is anything but funny. Putting Scrat in a spaceship is just a dumb idea, even if his fans again get a good laugh out of it. For as little sense as the whole thing may make, the scenes with Scrat and his nut are sadly the most amusing thing this machination has to offer.

Because the rest consists of dumb lines, unimaginative fart humor (how funny, he said turd) and a frame story dripping with clichés about the high good of family. The appearance of a hippie-Lama or a girlfriend for Sid could have possibly provided a little fresh wind. But the implementation is so loveless and uninspired that it's just annoying. Annoying because obviously a lot of talented people worked on the production. Because the animations are very good and also the 3D effects can largely convince. But direction and script are just a disaster, where you long for the meteorite impact at some point to put an end to this mess once and for all. But alas, a sixth installment is as certain as the obligatory dance sequence for the finale.

Of course, many weaknesses can be excused by the fact that kids don't mind them and still have their fun. And, after all, these movies are actually made for kids. That may be true. But in view of the fact that there are so many better animated films that don't just rely on cheap laughs, but also offer a charming story and a production that shows a certain passion, such a dramaturgically hackneyed little film is just annoying. Yes, the fans love Sid, voiced by Otto Waalkes. Yes, they love Scrat, even if the hunt for the nut on land, on water or now in space is always the same. Fair enough, but is that really enough to justify such a sub-par fifth installment?

There may be viewers for whom the answer to that question is a resounding yes. And such diehard fans can be forgiven for enjoying the film. But that doesn't make it good! For those who want to see a nice children's movie or a charming, funny animated film, Ice Age - Collision Ahead! can't be recommended at all. But for whom even a bad Ice Age movie is still an entertaining pleasure and who could laugh heartily about every part so far, will probably - incomprehensibly - have his fun here, too. And then, but only then, there is still a hesitant: Worth seeing!