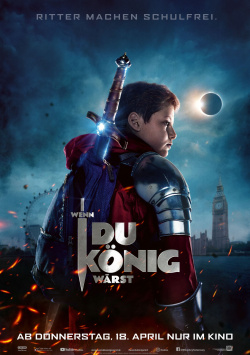 If You Were King

Alex (Louis Ashbourne Serkis) isn't exactly one of the strongest or most athletic kids at his school. Still, he bravely stands up to school bullies Lance (Tom Taylor) and Kaye (Rhianna Dorris) whenever they bully his best friend Bedders (Deam Chaumoo). When they seek revenge and ambush Alex after school, the boy ends up in a construction pit while on the run. Here he discovers an old sword, which he easily pulls out of a rock. With it, he sets off a series of unbelievable events. Suddenly a new student (Angus Imrie) appears, who turns out to be the old wizard Merlin (Patrick Stewart). He informs Alex that he is a descendant of the legendary King Arthur and that only he can stop the evil sorceress Morgana (Rebecca Ferguson) from regaining her ancient power. Because then all of humanity would be in danger. But to take on Morgana, Alex must form an unexpected alliance, but one that seems no match for the enormous danger that awaits.

With If You Were King, Joe Cornish delivers the long-awaited follow-up to his 2011 cult alien invasion thriller Attack the Block. In it, Cornish tells a modern take on the King Arthur saga, though it's primarily aimed at older kids. But the sometimes delightfully wry humor, charming characters, and clever play on ancient myths are definitely something adults can enjoy as well. It kept running through my mind while watching the film that I would have loved this funny as well as exciting adventure movie as a 12-year-old boy.

The humor is master child-friendly, but never gets silly. Unfortunately, that has become almost a rarity in children's and young adult films. In addition, Cornish shies away from over-dramatization, achieving that the evil magician and her minions are genuinely creepy or even terrifying, especially for younger viewers. This makes for a very successful film overall, but could also cause some nightmares for children under the age of 10. Don't worry though, If You Were King, while a little dark here and there, is primarily fun and offers a lot of really good laughs. Most of them go to the account of young Merlin, who is wonderfully quirky embodied by Angus Imrie.

The young actors, especially Louis Ashbourne Serkis (son of motion capture king Andy Serkis), can convince through the bank away. Their acting comes across as pleasantly natural and unaffected, which means that not only the humorous scenes work very well. They also master the more serious moments very credibly. And the film also has a few of these to offer, which Cornish has implemented with a sensitive hand, without them ever seeming too doctrinaire or too cheesy.

Towards the end, there are admittedly a few flaws to spot in the CGI effects. And the finale can be described as a wee bit overdone. But all in all, If You Were King is an all-around successful cinematic adventure for kids and the young at heart that's funny and exciting, but also hits the heart. Only the age rating from 6 years is not quite comprehensible because of some scenes. Nevertheless: Absolutely worth seeing!

Cinema trailer for the movie "If You Were King (Großbritannien 2019)"
Loading the player ...