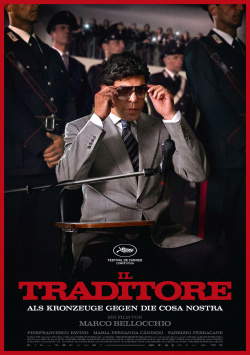 Il Traditore - As a key witness against the Cosa Nostra

The Mafia does not exist. Cosa Nostra is the name". So says Tommaso Buscetta (Pierfrancesco Favino), respected member of the Cosa Nostra, after his arrest. Of course, his code of honor requires him to remain silent to investigators. But after the power struggles between the godfathers of the Sicilian Mafia came to a bloody head, Tommaso is convinced that the other powerful clans had betrayed the ideals of the Cosa Nostra, while he, who had absconded to Brazil, had always remained a man of honor. Therefore, after his extradition to Italy, he makes a decision that shakes the foundations of the Cosa Nostra: Before Judge Falcone, he breaks his vow of silence and is ready to deliver the other godfathers to the knife.

Based on true events, director Marco Bellocchio tells in his new film "Il Traditore - Als Kronzeuge gegen die Cosa Nostra" the story of thebekannter Mafiosi Tommaso Buscetta, also known as Don Masino, who after a seemingly unstoppable career in the Cosa Nostra before he wanted to break in the early 1980s by fleeing to Brazil with the Mafia. Of course, since that couldn't be done so easily, he made the decision to cooperate with the Italian justice system. This led to the so-called "Maxi trial" of Palermo, in which 475 people were indicted. The trial ended with 360 guilty verdicts.

Bellocchio paints Buscetta as a very charismatic man, but avoids romanticizing the Mafia. Instead, his production captivates with an engaging sobriety that is only rarely broken by very intense moments, but also by a tiny bit of dry humor. This lends the story a certain authenticity, but also makes the film a little unwieldy overall. With a running time of over two and a half hours, this becomes a little unpleasantly noticeable due to a few lengths. No question, "Il Traditore - As a key witness against the Cosa Nostra" is a good, in places really impressive film, which is also due to the very good performance of lead actor Pierfrancesco Favino.

But because there are some very long, tough moments, the film lacks a real rousing element. Precisely because Bellocchio didn't want to deliver a typical mafia film, his work lacks the level of tension that distinguishes classics of this genre. "Il Traditore - As a key witness against the Cosa Nostra" is rousing over long stretches, but never really exciting. If that doesn't bother you, you'll be rewarded with a stylistically first-class drama about one of Italy's most spectacular trials. For this there is then also - despite some small deductions in the B grade - a clear: worth seeing!

Cinema trailer for the movie "Il Traditore - As a key witness against the Cosa Nostra (Italien / Frankreich / Deutschland / Brasilien 2019)"
Loading the player ...