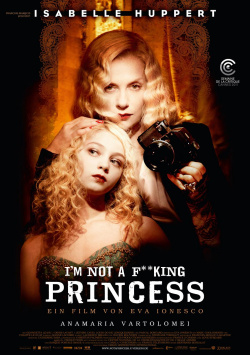 I`m not a f**king Princess

In 1970s Paris, ten-year-old Violetta (Anamaria Vartolomei) lives with her devout Romanian great-grandmother Mamie. The girl has no real relationship with her mother, the artist Hannah (Isabelle Huppert), as she only shows up sporadically and when she does, she tends to bring a little money and hardly any affection. That changes, however, when Hannah discovers her talent for photography and gets Violetta to pose for her in front of the camera. From the first photos in her morbidly furnished apartment, not only Hannah is heavily taken. And so she gets her daughter to step in front of the lens again and again in ever more daring poses and outfits. While the new mother-daughter relationship is observed extremely skeptically, especially by Mamie, Hannah gains high recognition in the art scene with her eccentric photos. She seems to completely overlook the fact that this comes at Violetta`s expense.

With her autobiographical film I`m not a f**king Princess, director Eva Ionesco delivers a controversial drama that raises some important questions. It is not just about where art ends and pornography begins. Rather, it's about what drives parents to exploit their children for media attention. In times when even the very young are presented by their parents in casting shows, this is a discussion that should definitely be had. Because there are enough cases that show what early fame can do to a child. While thankfully not always involving such drastic cases as depicted in this film, even a successful nursery rhyme, an iconic commercial, or a popular film role can not only bring great success, but also destroy an entire childhood.

It is interesting and distressing that Ionesco greatly downplayed her story for the filmic treatment. For example, she was only four, not ten, when the first photos were taken. In addition, she was repeatedly photographed completely naked by her mother, a line that is not crossed in the film. This is a good thing, because the drama never runs the risk of using the very thing it is indicting. The film is carried by an excellent debut from Anamaria Vartolomei, chosen from 500 Girls, who convincingly portrays Violetta's fall from grace and the loss of her childhood. Alongside her, Isabelle Huppert delivers frighteningly well as a mother eager for artistic recognition.

As intense as the actors are, as important as the questions the film raises, and as engaging as its imagery and set are, the whole thing lacks a certain distance on Ionesco's part. She seems too busy trying to come to terms with her own past that she overlooks the fact that the audience has little to no familiarity with her story. To be sure, Hannah's character is very clearly drawn, and Huppert's performance makes it clear that success and recognition from artistic circles are enormously important to her. But what drives her to exploit her daughter to such an extent in order to do so is only partially made clear. The film does too little to delve into the psyche of a clearly disturbed mother.

While some aspects of the story and its characters are illuminated very forcefully, others threaten to get lost in a certain superficiality. The problem with this is that it makes the film too unwieldy to elicit any real emotion from the viewer. To be sure, it is to Ionesco's credit that she has refrained from over-dramatizing, which makes the whole thing feel very authentic. But since the viewer actually lacks access to the characters from the beginning, interest in the unpalatable fate diminishes considerably at some point.

I`m not a f**king Princess is a superbly acted drama that deals openly, but not voyeuristically, with a difficult subject. The difficult-to-access staging, however, ultimately prevents the film from having the powerful impact for which it might well have had the potential. As a result, Eva Ionasco has succeeded in making a good, but unfortunately somewhat exhausting, coming to terms with the past that can only really be recommended to hardcore program cinema lovers.

Cinema trailer for the movie "I`m not a f**king Princess (Frankreich 2010)"
Loading the player ...