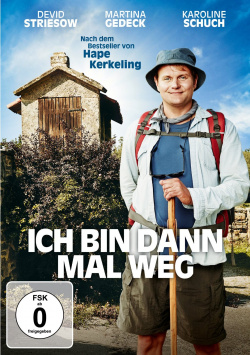 Film: The celebrated entertainer Hape (Devid Striesow) has reached the peak of his success when he suddenly collapses on stage. After many stressful years, Hape's body fires a warning shot to which he reluctantly complies. The compulsory break of several months prescribed by the doctor, however, is not really to Hape's taste - until he makes a decision that his agent Dörte (Annette Frier) thinks is completely crazy: he wants to hike the Way of St. James to Santiago de Compostela. Maybe here, far away from the limelight and everyday stress, he will find answers to the really important questions in life. And maybe he will even find God? But after a short time his physical condition, his aching feet and not really ideal overnight accommodations dampen his motivation and Hape is about to give up. But then he meets the pilgrims Stella (Martina Gedeck) and Lena (Karoline Schuch), who give him the necessary motivation to persevere at the decisive moment. And so perhaps the Way of St. James will bring Hape the hoped-for enlightenment in the end?

With over 5 million copies sold, Hape Kerkeling's travelogue Ich bin dann mal weg is one of the most successful German non-fiction books ever. The book topped the bestseller lists for over 100 weeks. The audio book and a reading tour were also a complete success. The book also triggered a real boom on the Way of St James, which continues to this day. A film adaptation was quickly decided. But it was to take almost ten years before the plans could be implemented. Even if almost everyone knows and loves the book, this does not automatically guarantee success for the cinema adaptation. For one thing, the adaptation of a non-fiction book has to take some dramaturgical liberties and move away from the original in order to work. On the other hand - and this is probably the most important point - there is probably no one who can imagine Ich bin dann mal weg without Hape Kerkeling. But that's exactly what the audience gets here.

It's certainly understandable why Kerkeling didn't want to play himself, why he didn't want to re-enact this very special journey after all these years. But he is simply a very special character, unique in his own way, who can't be replaced so easily. And so, at the beginning, it is actually difficult to make friends with actor Devid Striesow as Hape Kerkeling. This is not because of Striesow, but because of the oversized shoes he has to fill. But after about 20 minutes something completely unexpected happens: as a viewer you forget these reservations. Striesow melts into the character in such a way that a completely unique character emerges, one that you don't constantly compare to the Hape Kerkeling you know and love. Striesow refrains from trying to copy Hape 1:1 and thus creates a relatively independent character that one is only too happy to follow on the not always easy path.

This is captured in wonderful images in which one can lose oneself only too gladly. With a harmonious mixture of humour and quiet, thoughtful moments, director Julia von Heinz has achieved something that was quite doubtful at the beginning: she has created a really beautiful film out of the book, at the end of which you have the feeling of having to say goodbye to a group of new friends with whom you have just spent a particularly pleasant time. In just 90 minutes, Hape, Stella and Lena grow incredibly close to your heart and it is simply a lot of fun to follow them on the Way of St. James. Even if the film may have its little weaknesses in places, the good actors and the perfect chemistry between them easily compensate for this.

I'll be off then is a really successful film adaptation of the bestseller. Of course Hape is missing a little here and there. But the makers and actors have managed to master this seemingly oversized hurdle skillfully. The result is pure feel-good cinema and therefore also: absolutely worth seeing!

Picture + Sound: The image of the DVD pleases with a decent overall sharpness and warm colors, through which it succeeds in capturing the beauty of the landscape along the Way of St. James. You'll look in vain for smudges or distracting blurs here. The Dolby Digital 5.1 mix doesn't offer any surround effects fireworks, but it does transport the dialogue, music and ambient sounds out of the speakers in a well-matched manner. Good!

Extras: In addition to the trailer for the film, the bonus material, which runs just shy of 12 minutes, unfortunately only offers three promo featurettes about the filming, the journey from book to film, and the characters.

Conclusion: I'll be off then is a successful film adaptation of Hape Kerkeling's bestseller, which could inspire even without the master himself over 1 million moviegoers. On the DVD, the amusing as well as thoughtful search for meaning presents itself in atmospheric picture and sound quality. The bonus material, however, is a little meager. Overall, there is for this disc a very clear: Absolutely recommendable!