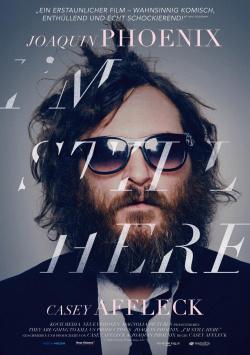 It was news that surprised and also shocked a little: at the height of his success so far, two-time Oscar nominee Joaquin Phoenix announced that he was retiring from acting altogether. He said he was tired of having to play a role all the time. Rather, he now wants to try his hand at being a hip hopper. His friend and brother-in-law Casey Affleck documented Joaquin Phoenix`s self-discovery trip for two years, and in I`m Still Here he shows a man who seems to be getting crazier and crazier, and more and more unlikable in the process, stepping ever closer to the threshold of professional and personal self-destruction.

The highlight was Joaquin Phoenix`s appearance on US talker David Letterman`s Late Show, which was even parodied at the subsequent Academy Awards and on numerous other shows such as Saturday Night Live, making Phoenix an absolute laughing stock. But then Casey Affleck revealed what many had already guessed anyway: the whole story is staged and a kind of long-running performance, the result of which is a fake documentary of a very special kind.

I`m still here is a somewhat peculiar viewing pleasure. Watching Joaquin Phoenix apparently fall off more and more, consuming drugs on camera or having fun with prostitutes, letting himself go more and more on the outside or desperately trying to make a career as a hip hop artist with the help of Sean P Diddy Combs, only to be kindly kicked out of the studio by the rapper, is filled with exhausting confused monologues from the actor, moments of absolute strangeness and an annoying self-promotion. On the other hand, the film is also filled with very amusing moments, with the unhinged appearance on Letterman being one of the absolute highlights of the documentary precisely because of the host`s commanding reaction.

As a deconstruction of the Hollywood myth, I`m still here works just as well as an almost brilliant long-term performance by a very idiosyncratic artist. But as time goes by, the viewer also wonders here and there whether Phoenix, who has consistently pulled off his role, has not become a victim of his own staging in some moments and whether he will be able to break out of this performance so easily. The borders between art and reality seem to blur again and again, the viewer gets stuck laughing more and more often and in the end you just feel like a voyeur standing on the side of the road and watching with pleasure the victims of a cruel accident. This effect alone makes the film very interesting from a purely psychological point of view.

Whether an elaborate PR stunt, a brilliant art performance, or just plain pure bullshit, I`m Still Here will divide, excite, annoy, amuse viewers. And that is exactly how Phoenix and Affleck have achieved their goal. A not-really-easy film that almost completely blurs the line between insanity and genius, I`m Still Here is also incredibly difficult to judge. For those who are not put off by a (seemingly) confused Joaquin Phoenix blathering along, and for those who want to see for themselves how much of the actor and how much of the real man is on display here, I`m still here can definitely be recommended.