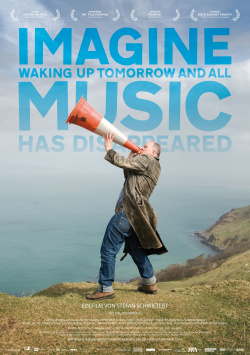 Imagine waking up one morning and all music has disappeared. There are no more CDs, no songs on the radio or iPod. What if we have to start from scratch again with our definition of music? This is the starting point for a very special project by Bill Drummond. The former member of the formation KLF travels the country and asks people to become part of The17, the largest choir in the world. He records the individual sounds, which he will later mix together. The result is then played only once and then destroyed. An unusual project, entirely in keeping with Drummond's anarchic spirit.

In his documentary Imagine waking up tomorrow and all music has disappeared, German-Swiss Stefan Schwietert accompanies Drummond on his journey, at the end of which is the completion and performance of The17 (though you don't get to hear the piece in the film, otherwise the point of playing it once would have been taken ad absurdum). In between scenes showing the eccentric artist persuading ordinary people to sing single notes for him, Drummond talks about his intentions, but also about his personal relationship to music. Of course, he also talks about his time with KLF and the spectacular end of the formation, whose music is not allowed to be distributed on CD or digitally today. That's where Drummond and his former partner remain consistent, even though they've been offered horrendous sums for re-releases of KLF albums on several occasions.

These biographical moments and excerpts from a talk show in which KLF had to justify publicly burning $3 million actually make up the most exciting part of the documentary. Otherwise, Drummonds' journey is a bit plodding and a bit redundant in the long run. The question raised in the film's title also fades more and more into the background and only really reappears at the end. It is not quite clear whether the film wants to be a biography of the artist, a documentary of a very unusual art project or perhaps something else entirely.

However, even if a somewhat clear structuring would have possibly increased the entertainment value of the documentary a tiny bit and even if one wishes, after the promising title, that the question of what a world without music would really look like would have been dealt with a bit more deeply, the film and its protagonist are in the end interesting, refreshing and entertaining enough to be well worth watching for lovers of unusual documentaries and even more unusual personalities!

Cinema trailer for the movie "Imagine waking up tomorrow and all music has disappeared (Deutschland/Schweiz 2015)"
Loading the player ...