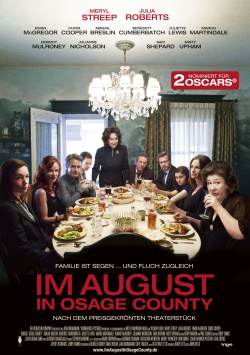 In August in Osage County

The days when aging writer Beverly Westen (Sam Shepard) could claim to live a happy life are long gone. His embittered wife Violet (Meryl Streep) can no longer go a day without painkillers and psychotropic drugs - though the oral cavity cancer she suffers from only justifies a small portion of the pills she swallows day after day. In order to be able to put up with Violet at all, Beverly takes refuge in alcohol. Now and then he just disappears for a few days. And so Violet doesn't worry too much at first when her husband is once again nowhere to be found. But when after a few days a body is recovered from the lake, it is clear that Beverly will never return. Now the family, scattered in all directions, comes back to Osage County to stand by Violet in her grief: Daughters Barbara (Julia Roberts), Ivy (Julianne Nicholson) and Karen (Juliette Lewis), Violet's sister Mattie Fae (Margo Martindale) and her husband Charles (Chris Cooper), as well as their son Little Charles (Benedict Cumberbatch), Barbara's still-husband Bill (Ewan McGregor) and Karen's new boyfriend Steve (Dermot Mulroney). It's not long before old wounds are reopened and new conflicts arise. And gradually, even the darkest family secrets come to light.

In August in Osage County is based on the Pulitzer Prize-winning stage play by Tracy Letts, who also adapted the screenplay himself. Although director John Wells has captured some wonderful, cinematic images on location in Oklahoma, the film as a whole can never quite deny its theatrical origins. Despite the vastness of the landscape, In August in Osage County is a chamber drama that is carried solely by the dialogue and the actors. Certainly, that works well with an ensemble cast like the one Wells has lured before the camera here. But even the first-rate performances from Julia Roberts, Meryl Streep or Benedict Cumberbatch can't hide the fact that at times the action feels a bit unwieldy and too detached from the theatrical stage.

Nor does the story itself really offer light cinematic entertainment. Even though there are some moments filled with dialogue wit and bitter humor, the confrontation of the extremely dysfunctional family with the shadows of their past is heavy and definitely exhausting fare. No question, great acting and also outstanding writing is definitely the whole thing. But when Violet slurs or yells indispensable vulgarities in a pill-fueled stupor, or Mattie Fae never misses an opportunity to humiliate her son Little Charles, some viewers are bound to wonder why they spent money to witness this dreary goings-on.

But if you can get into the theatrical style of the production and the slightly depressing underlying mood, you'll find that In August in Osage County can unfold all its strong points. And the film has a few of them. The already repeatedly mentioned class of the first-class cast saves the film even over its drier moments. And some scenes are filled with an almost whimsical hysteria that it's hard to keep from laughing heartily, but also a little desperately. Such moments help to relieve some of the basic heaviness and give the proceedings something of an entertainment value. And in the end, there's definitely one good thing to come out of all this: no matter how annoyed you might be with your own family, after spending two hours with the Westen family in Osage County, you're just thankful you didn't hit it as bad as Barbara, Ivy, and Karen.

Bottom line, In August in Osage County is a good movie, even a very good one in places. But it's also a very unwieldy, heavy work that you have to get into to avoid storming out of the theater completely unnerved after 30 minutes. If you manage to do that, you'll get first class acting cinema with some outstanding moments. So if you like it a little more sophisticated and extremely dysfunctional, you can safely pay a visit to the family West in Osage County. Worth seeing with minor reservations!

Cinema trailer for the movie "In August in Osage County (USA 2013)"
Loading the player ...